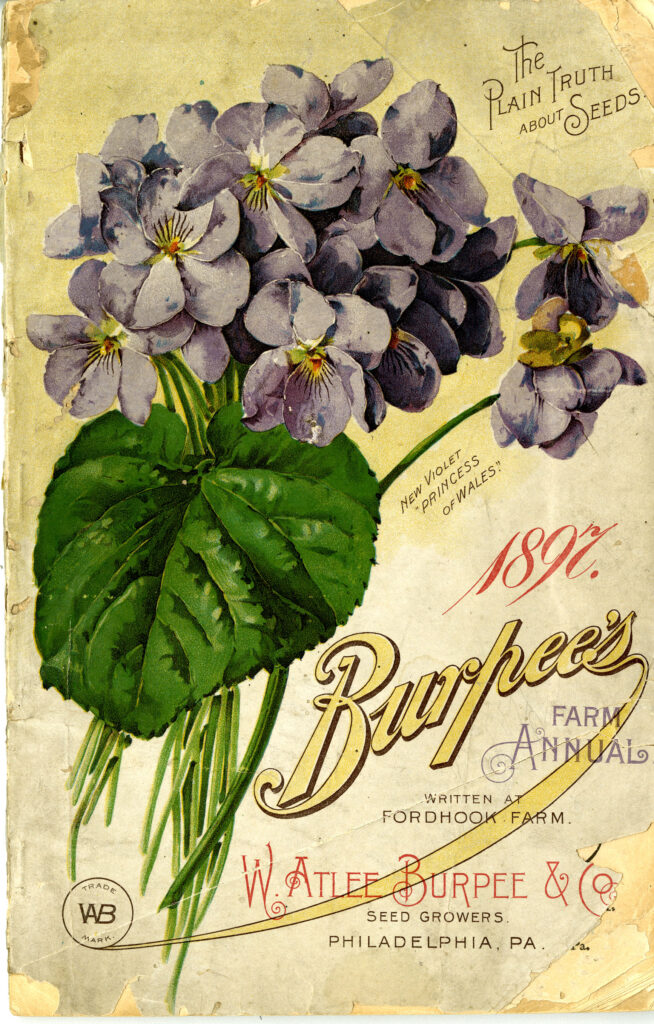 Bucks County is home to two major heritage seed companies, Burpee Seeds and Landreth’s Seeds. Burpee Seeds, officially W. Atlee Burpee & Co., is an American seed company that was founded by Washington Atlee Burpee in Pennsylvania in 1876. The D. Landreth Seed Company was founded in 1784 and moved to Bloomsdale Farms in Bristol, Pennsylvania in 1847. This image is from the 1897 Burpee seed catalog cover. 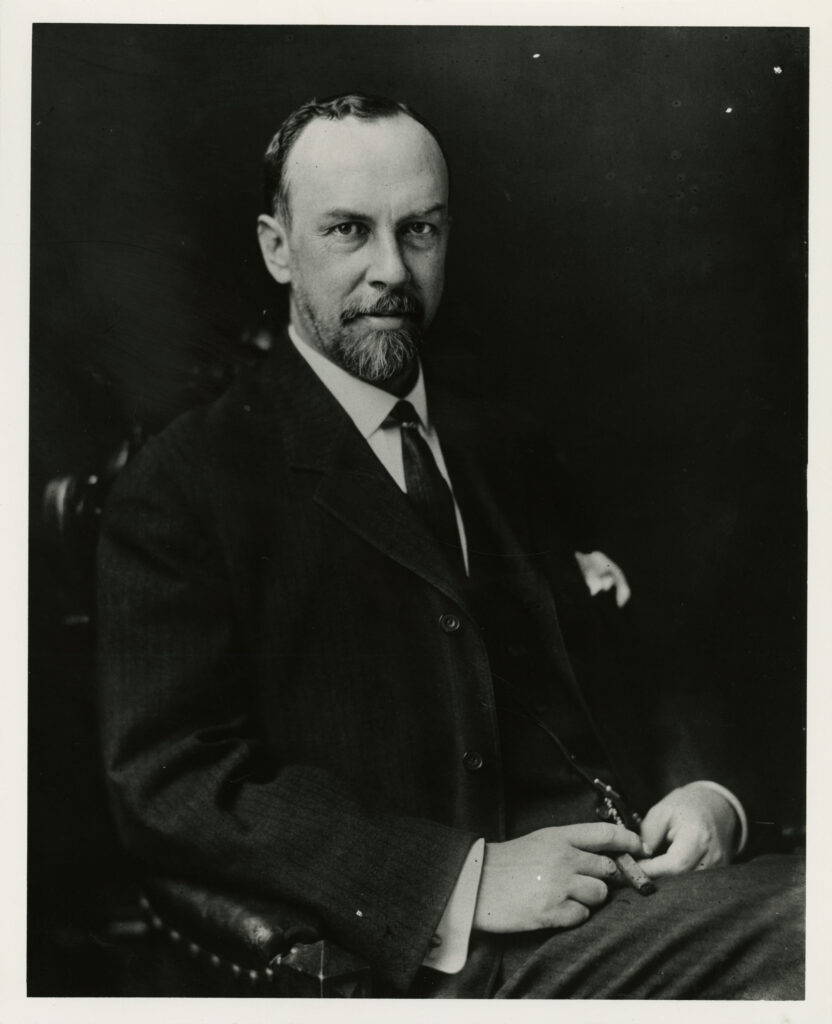 Washington Atlee Burpee was born on April 5, 1858, in Sheffield, New Brunswick, Canada. He attended private schools and enrolled in the University of Pennsylvania to pursue medicine and become a doctor like this father. Washington dropped out of the University of Pennsylvania after two years to start a mail-order chicken business. He founded the W. Atlee Burpee & Company in Philadelphia, Pennsylvania in 1876. By the 1880s, the W. Atlee Burpee Company was supplying most of the United States with seed as well as livestock, making it the world's fastest-growing, mail-order seed company. Washington often traveled to Europe to meet growers and cultivators of plants. Until World War I, Burpee traveled more than 30,000 miles each year looking for seeds that would produce superior vegetables and flowers. Burpee was also an active member of the Bucks County Historical Society. He died on November 26, 1915, at Fordhook Farm, Pennsylvania, and is buried in Doylestown Cemetery. 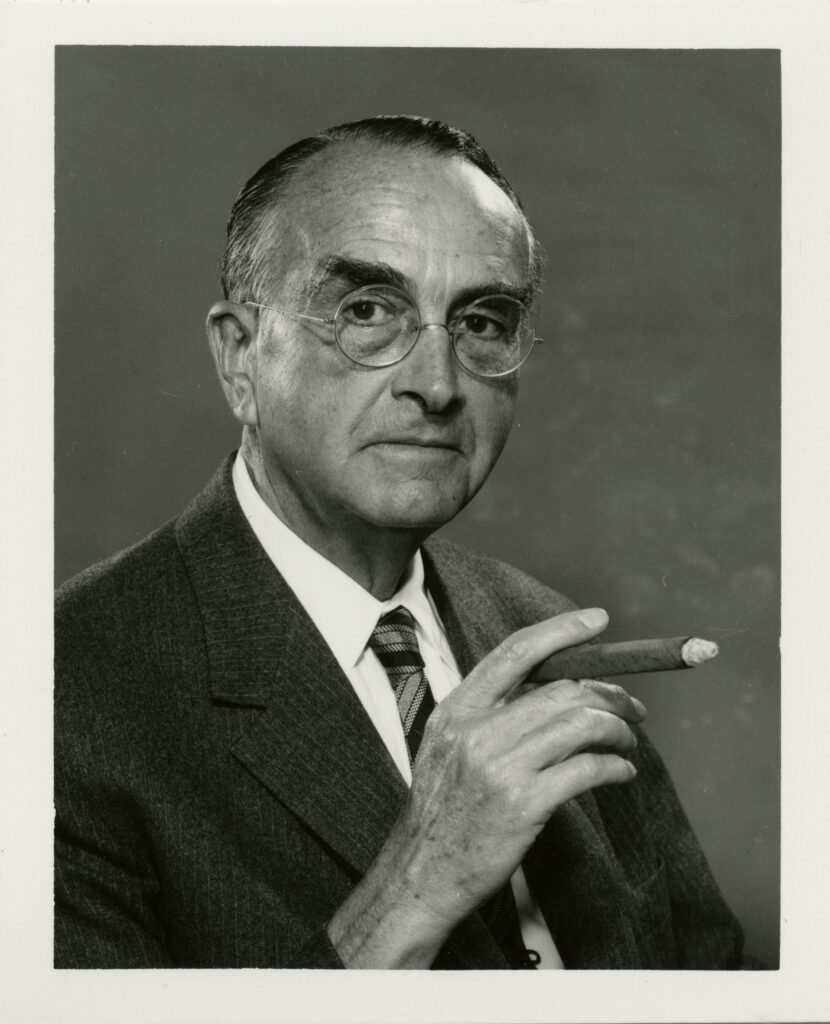 After Washington’s death in 1915, his son David took over running the company at the age of 22. With this came a new direction for Burpee Seeds, which included an interest in wartime victory gardens. David was an early promoter of the concept during World War I. He also loved flowers and originated several flower hybridization breeding programs. Under David’s leadership, the advertising and catalog also improved. The advertisements began to include full-color advertising and the motto “Burpee's Seeds Grow”. In subsequent decades, he “handed out seed packets the way John D. Rockefeller handed out dimes,” He also named flowers after Helen Hayes, Mamie Eisenhower, and Bucks County neighbor Pearl S. Buck. David Burpee died on June 24, 1980. 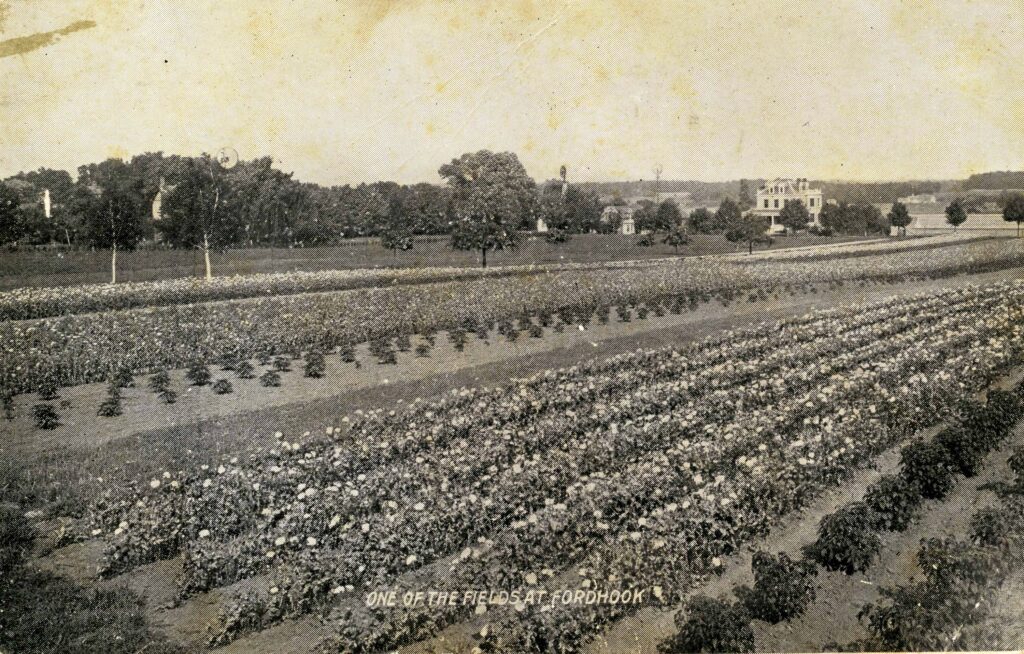 Fordhook Farm, located in Doylestown, Pennsylvania, was established as the Burpee family home and farm in 1888. The farm also served as crop field trials after Burpee began traveling to Europe to collect seeds, which needed to be adapted to North American climates. The farm encompassed many buildings including houses, a barn, a springhouse, a carriage house, a seed house, and two greenhouses. The main house is constructed of fieldstone and the oldest section pre-dates 1798. In 1981, experimentation and seed production left Fordhook Farms. This photograph shows one of the fields at Fordhook Farm in 1908. 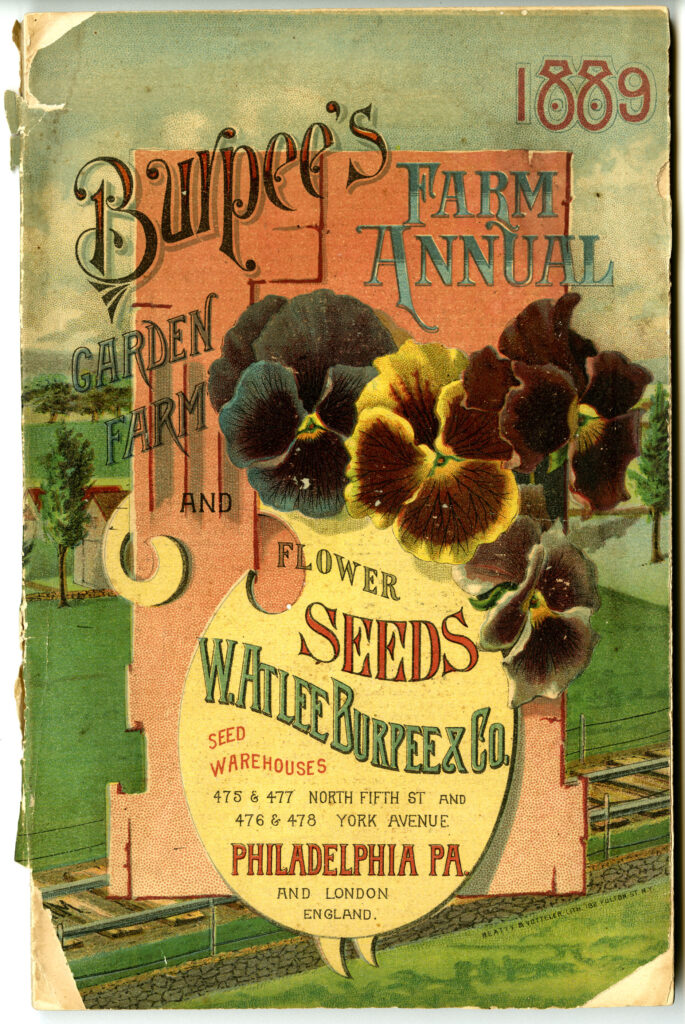 While Washington Burpee traveled in Europe, he kept a field book of data and observations. Then, while he voyaged home, he would study all his notes. The field book, with some edits, would become that year's Burpee catalog. In those early years, farmers rather than home gardeners made up the majority of Burpee customers; the catalog was called “Burpee's Farm Annual”, and a lot more catalog space was allotted to vegetables than to flower seeds and bulbs. To illustrate the catalog, Burpee sometimes purchased European plates but primarily relied on immigrant watercolorists from Germantown (a suburb of Philadelphia), who were known for their great artistic skill. Soon Burpee Seed catalogs were known for their beauty and attractive depictions of plants. This Burpee Seed catalog cover from 1889 is decorated with drawings of colorful pansies. 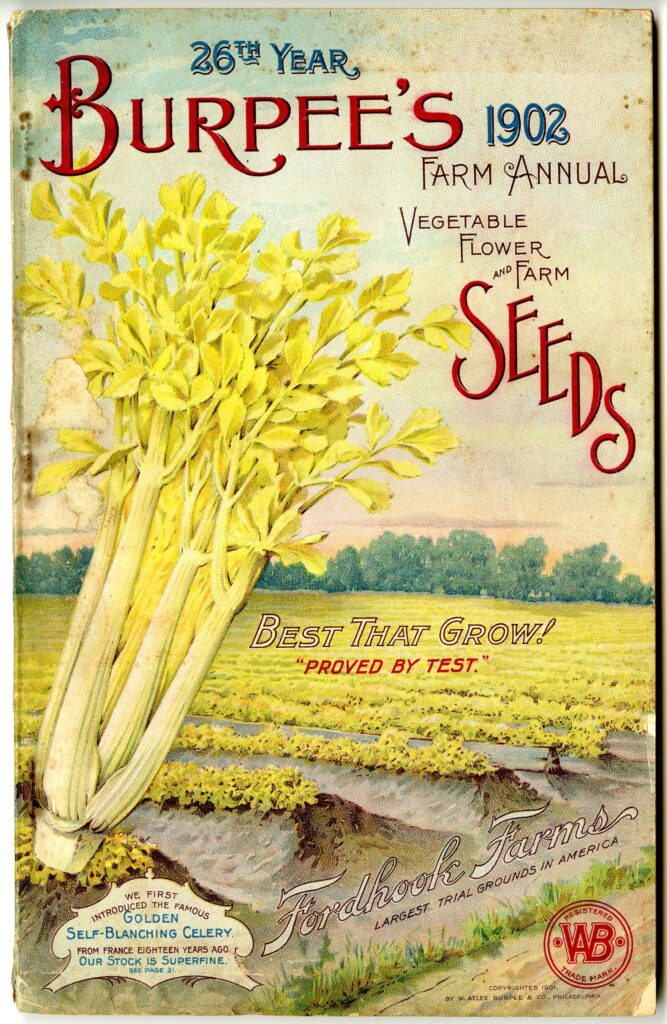 In the early 1900s, yellow corn was grown strictly for livestock and poultry feed. At the time white corn was the only type considered appropriate for people to eat. But William Chambers, a farmer in Greenfield, Massachusetts, grew a delicious unnamed yellow mutant sweet corn that became locally famous. When Chambers died, a friend of his found a handful of yellow kernels among his possessions and sold them to Burpee. Burpee was curious about this new type of corn and began investigating. The result was Golden Bantam, the first yellow sweet corn, which was offered to the world in the catalog for the first time in 1902. This is the cover for the 1902 seed catalog. 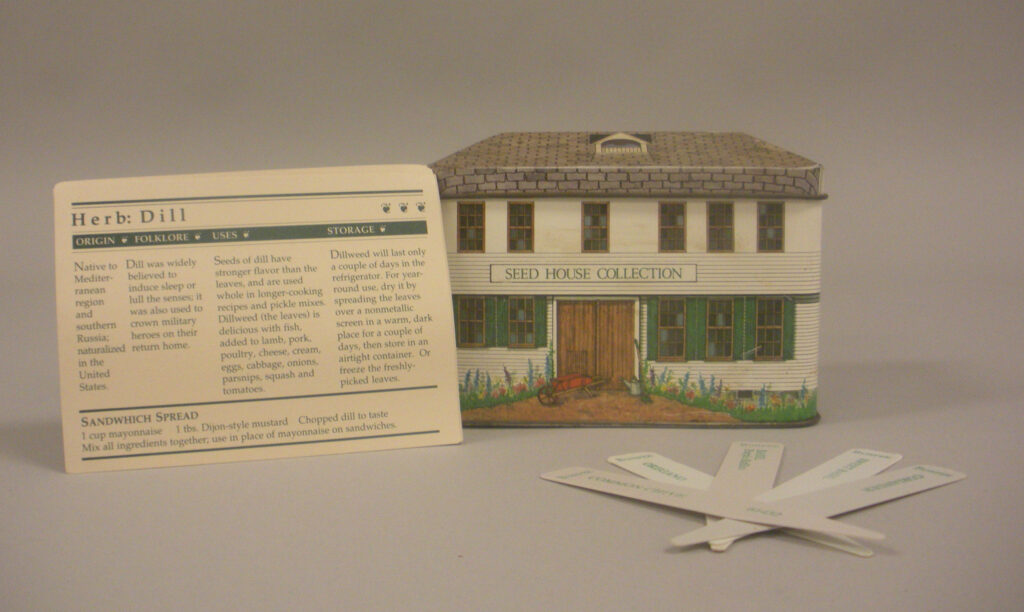 This decorative tin seed container from the 1970s includes nine cards detailing the origin, folklore, usage and storage of various herbs. It also has five plastic labels for spices. The tin is based on the seed house at Fordhook Farms. The trial ground for seeds was established in 1888 and the second house, built in 1895, was used to dry, clean and store seeds grown at the farm. The wide doors allow wagons to be driven directly into the seed house where elevators carried the seeds to the two upper floors. The windows provided the airflow needed to dry the seeds before mailing them to customers. 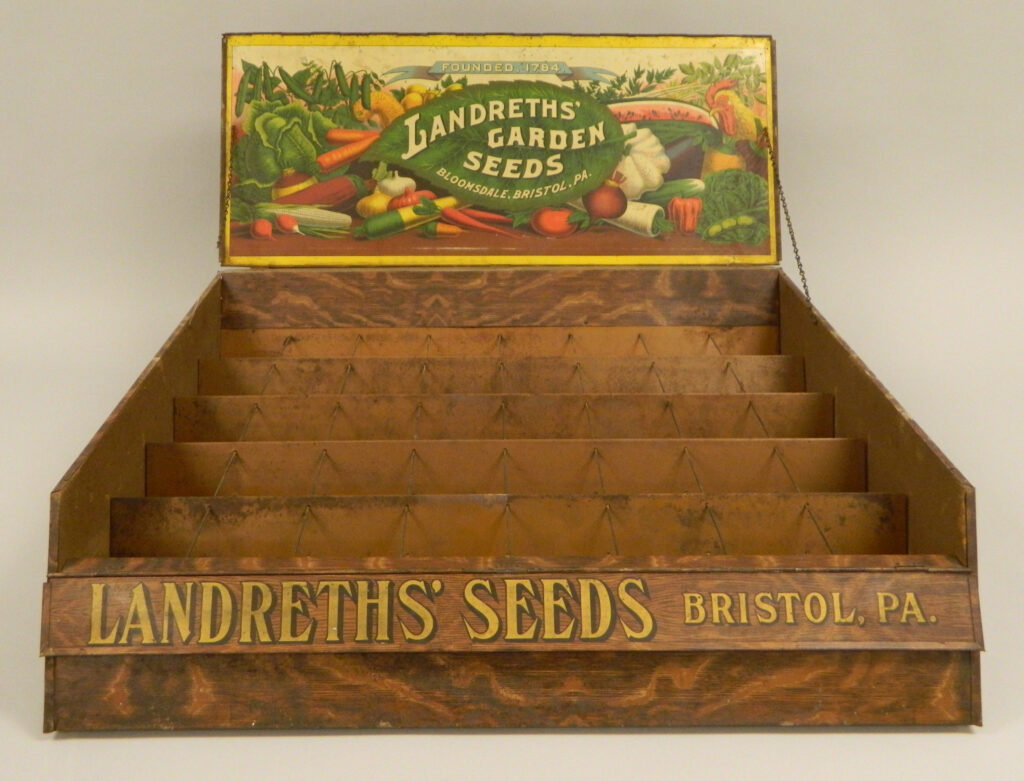 The D. Landreth Seed Company is one of the oldest companies in the United States. David and Cuthbert Landreth founded it on January 7, 1784. It was first located on High Street (now 1210 Market Street) in Philadelphia, Pennsylvania. This image is of a wooden seed packet display case used by the company from our collection. 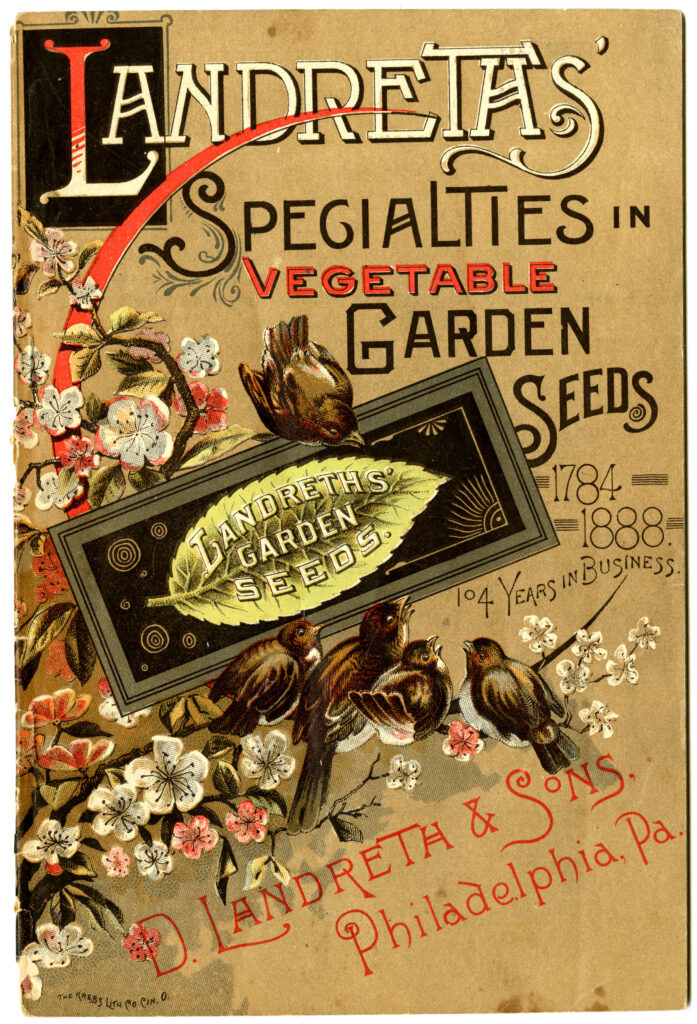 David Landreth was born in 1752 in Northumberland, England. In 1780, Landreth immigrated with his family to Montreal, Canada, to establish a seed company. The harsh Canadian weather forced him to relocate to Philadelphia in 1783. In 1786, he partnered with his brother Cuthbert to run the business. At first, David sold seeds to the city of Philadelphia and nearby estates. Over time his business grew and George Washington, Thomas Jefferson and Joseph Bonaparte were among his customers when they visited the city during the Constitutional Convention in 1787. This image shows a Landreth’s seed catalog cover from 1888. 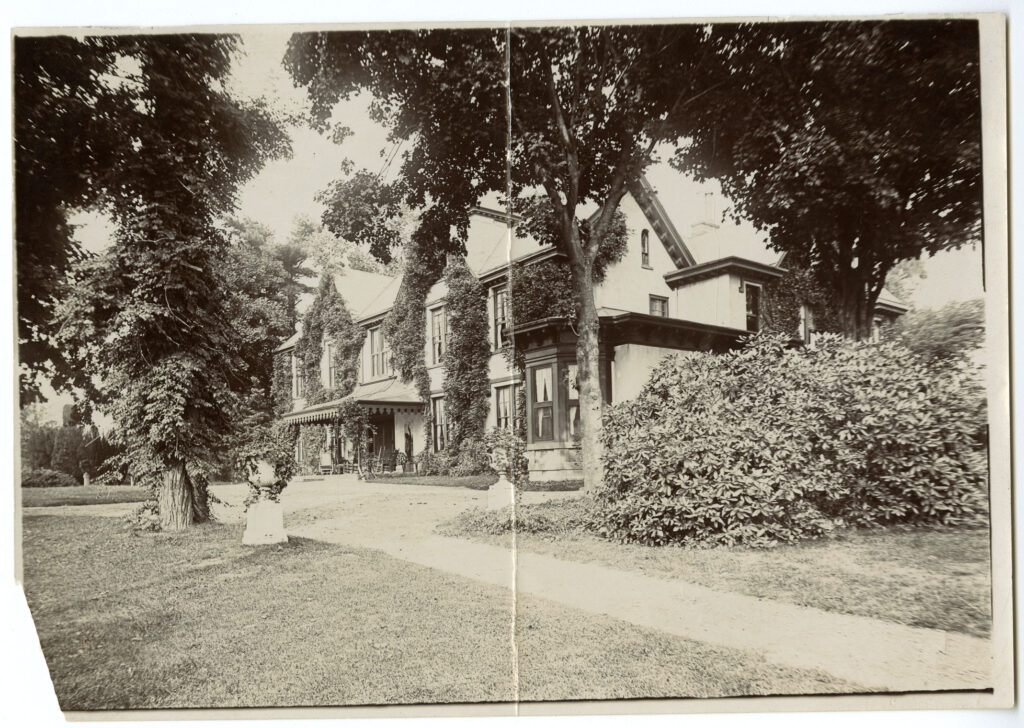 D. Landreth and Sons moved to Bloomsdale Farms to test seeds in Bristol, Pennsylvania in 1847. This track originally contained more than 1,000 acres and extended for two miles along the river. The farmhouse was built in 1752 by Captain Alexander Graydon. A later owner, Leopold Notnagle, erected a stone barn near the house in 1807 and turned the farm into a mulberry plantation. The Landreth’s purchased the farm in 1847 and turned it into the headquarters for their seed company. 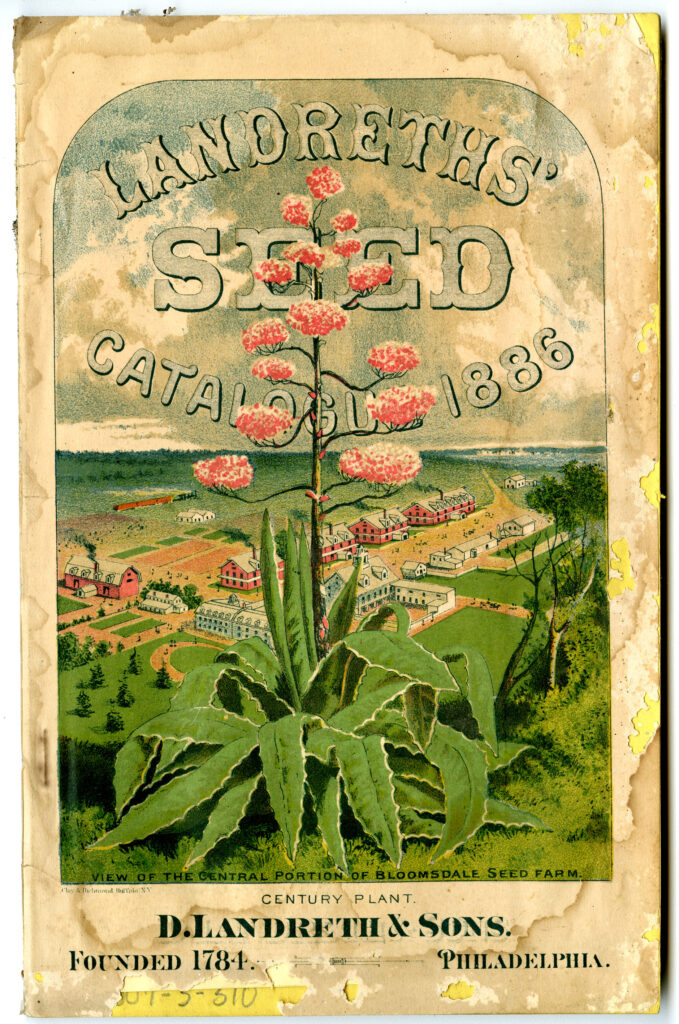 The Landreth’s seed catalogs featured illustrative woodcuts until the 1890s when the company became one of the first to introduce photography in their catalogs to show how the plants appeared in real life. This catalog from 1886 includes illustrations of flowers and also an aerial view of Bloomsdale Farm. 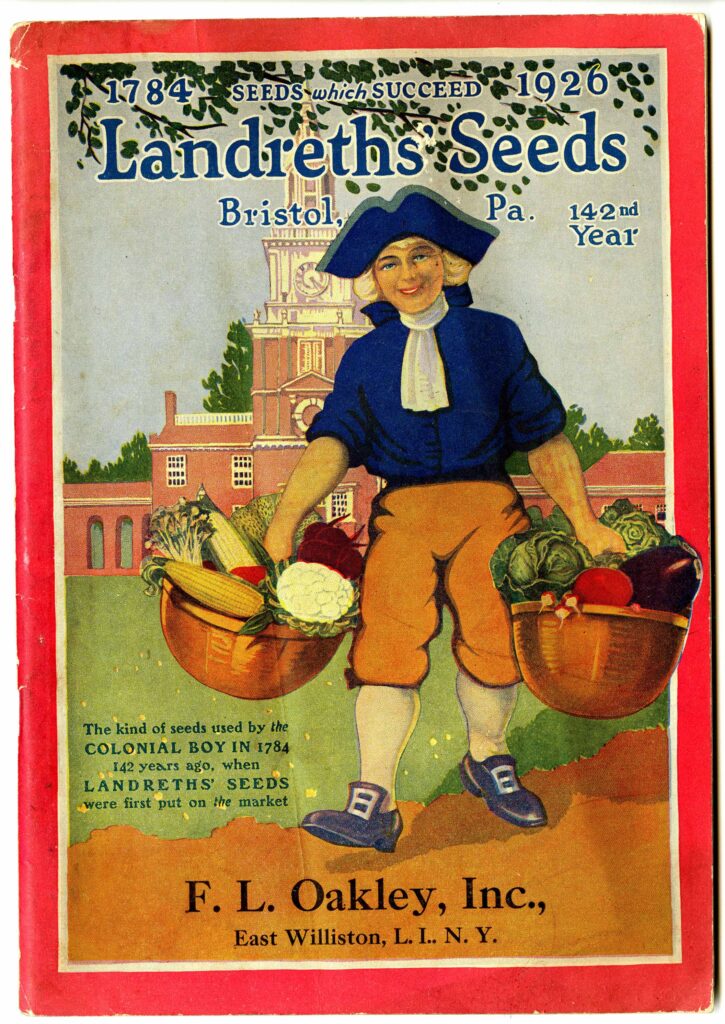 After the Civil War, the company began associating itself with patriotism using slogans such as “American seeds for the American climate” and “the American seed house” as well as utilizing the Liberty Bell in its logo. Another common mascot for Landreth’s seed catalogs was the “Colonial Boy”. He is depicted on the front cover of the catalog several times over the years. This particular catalog from 1926 shows the Colonial Boy in front of Independence Hall in Philadelphia. 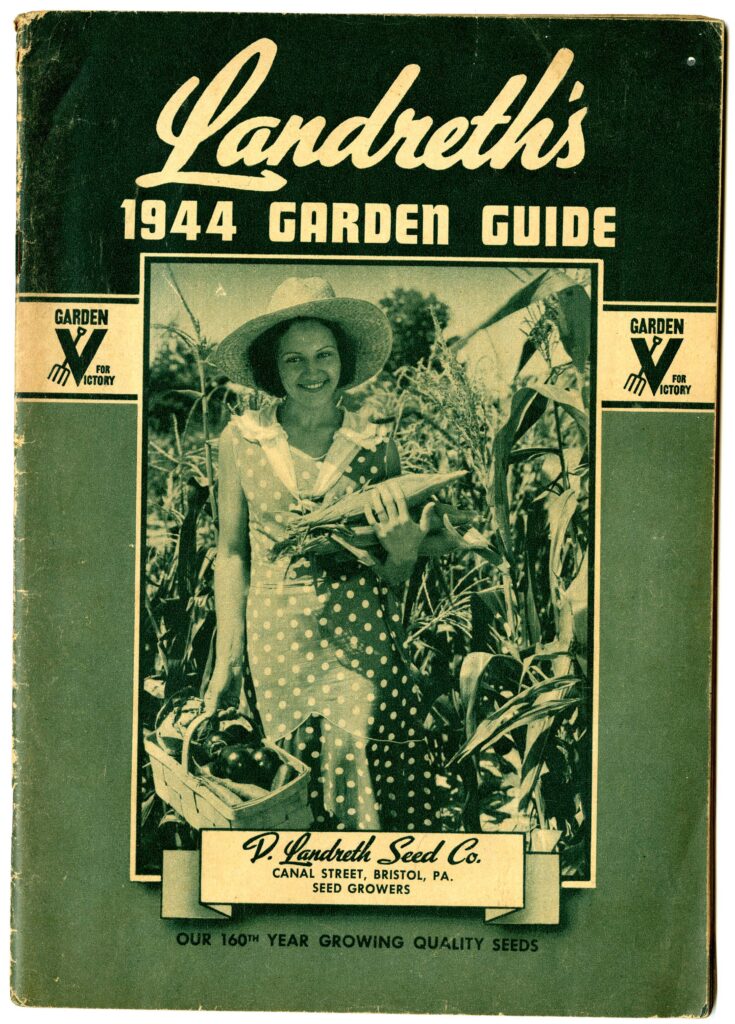 Victory gardens were vegetable, fruit, and herb gardens planted at private residences and public parks across the world during World War I and World War II. Victory gardens served many purposes including a morale boost and a way to supplement ration cards and reduce pressure on public food supply. This 1944 Landreth’s garden guide provided information on how to grow a victory garden and sold seeds necessary to grow food.