One of the best selling 5 cent cigars in America was made in Bucks County.  It was the Cinco, produced by the Eisenlohr Factory in Perkasie. Although a lot of ‘wags’ referred to the Cinco as the “Stinko,” it was popular among smokers. It is said that after smoking a Cinco cigar, Vice President Tom Marshall made his famous remark, “What this country needs is a good five cent cigar.” 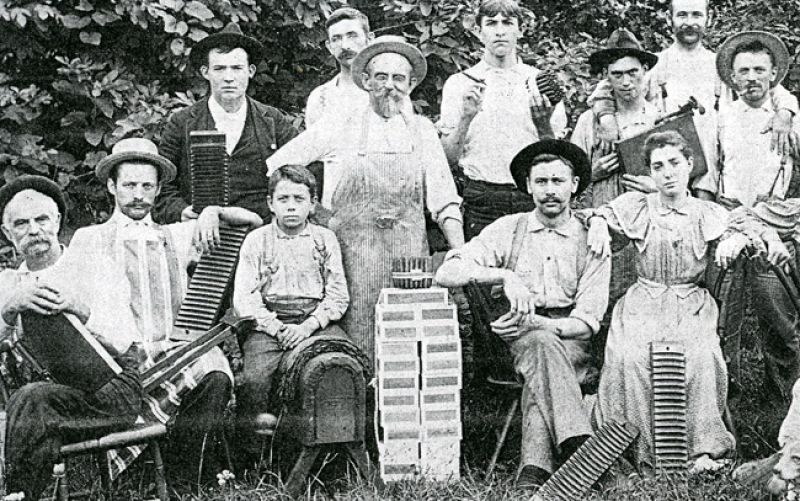 The production of cigars played a major role in the economic development of Bucks County between the 1880s and the 1920s.  Articles in the Daily Intelligencer newspaper in October of 1899 indicate that no less than 1000 hands were employed in Quakertown at that time. “The cigar making industry of Bucks County seems to be confined almost exclusively to Quakertown, Perkasie and Sellersville, with a few small factories at Trumbauersville and other nearby villages,” the paper reported.  Some early factories began by employing fewer than 5 people. These were called “Buckeye” shops.  This image depicts workers in a Buckeye shop in Trumbauersville, along with the cigar maker’s board and cutter, stripping buck, wooden cigar boxes and a bundle of cigars.

Photograph from History of Trumbauersville 1776-1976.  Used by permission. 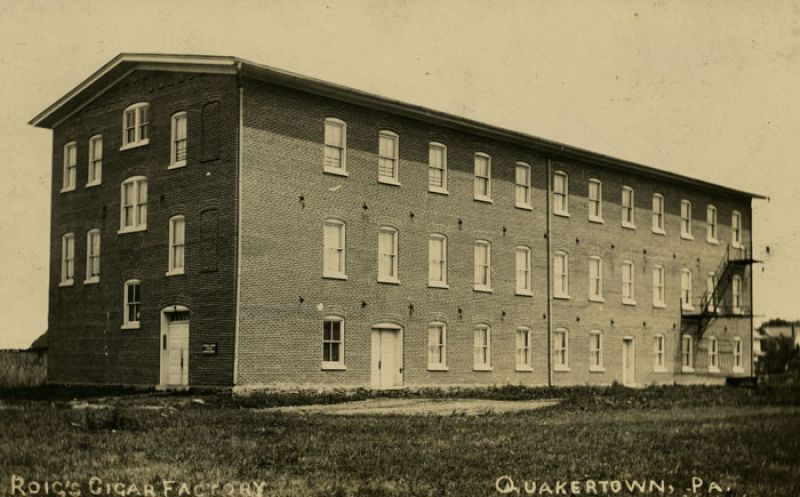 By 1880 many farm children in Bucks County, both male and female, left school after the eighth grade to work in factories. As the cigar industry grew, so did the size of the factories, like Antonio Roig’s Cigar Factory of Quakertown (pictured here). According to an account in the Bucks County Traveler (July, 1954), “cigar making was one trade that men and women could work at with their hands and still enjoy music, reading and enter discussions.” Sometimes a musician played throughout the work day, or someone read aloud from books and newspapers. Both were paid directly by the workers. 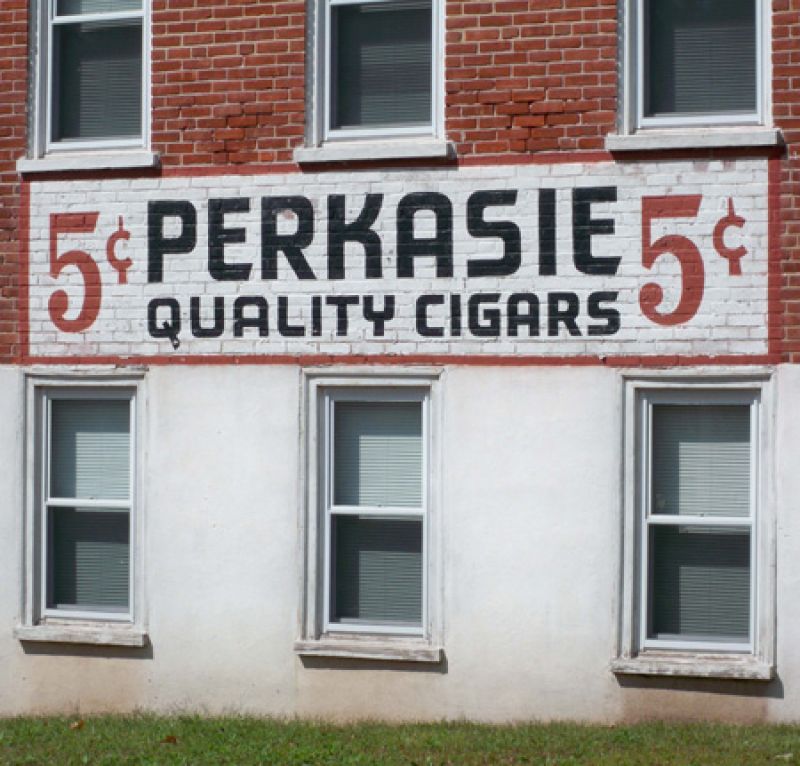 Remnants of an Industry

The expansion of trolley and train lines allowed these factories to draw their work force from many of the surrounding areas. Production eventually moved elsewhere, however, Bucks County’s cigar industry eventually declined.  Still, remnants of the industry and cigar culture still remain in places in upper Bucks County. 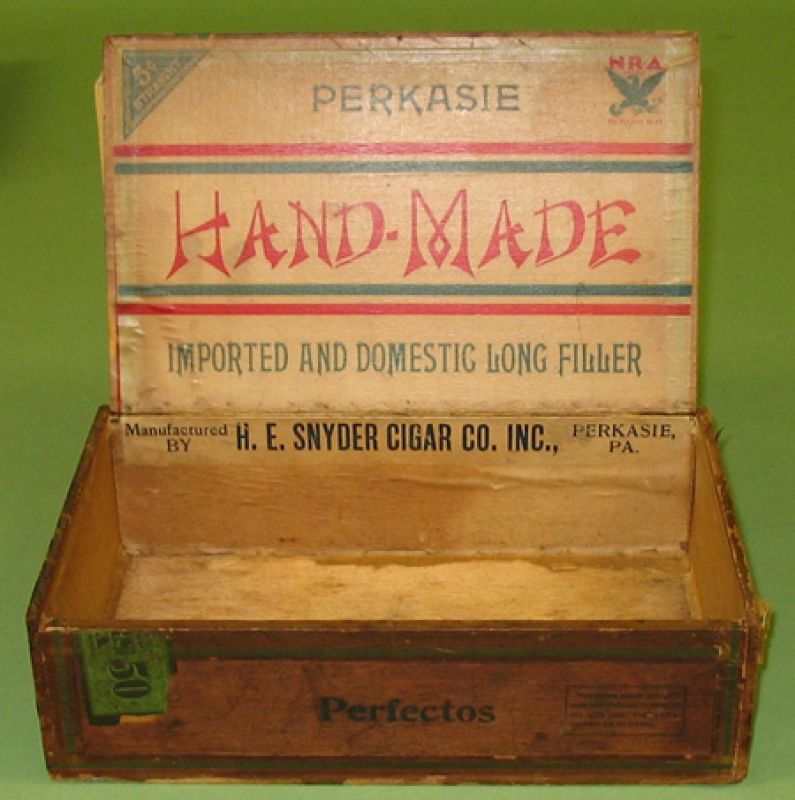 A variety of artifacts and images in the Mercer Museum collections document cigar-making traditions in Upper Bucks County from the late 1800s through the early 1900s.  Cigar boxes in particular, with their pasted paper labels, provide colorful visual evidence of this once booming industry.  These boxes often bear the labels of a number of firms formerly located in the villages of Quakertown, Trumbauersville, Perkasie, Richlandtown,  Sellersville, and Doylestown. 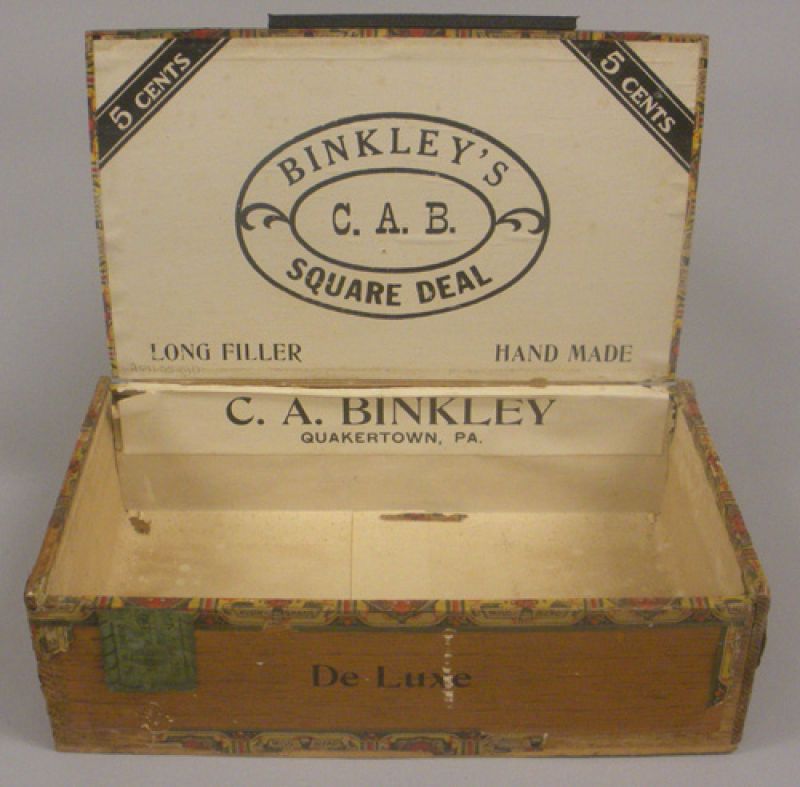 The C.A. Binkley Cigar Company was located in Quakertown. 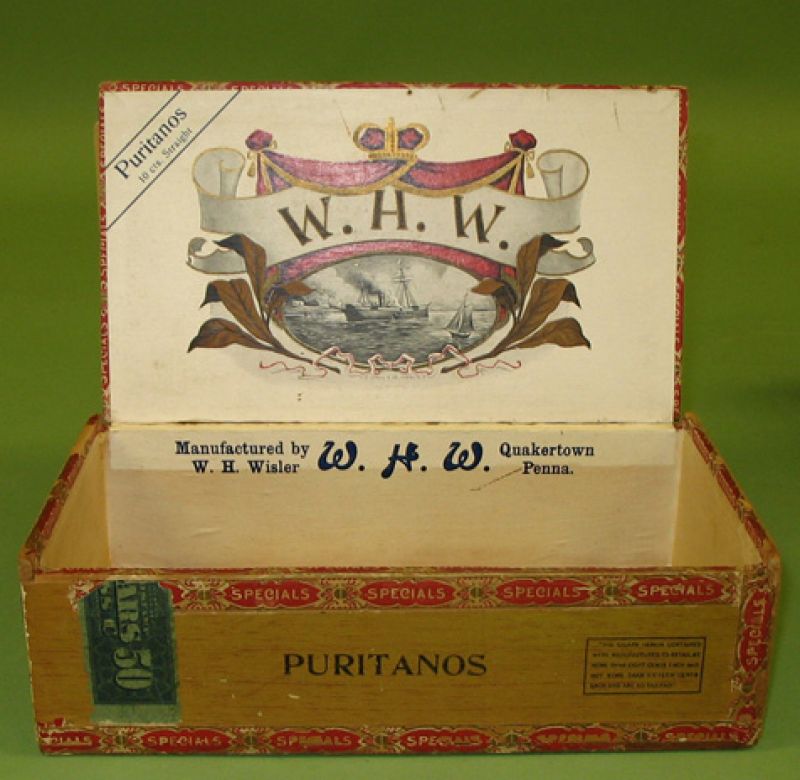 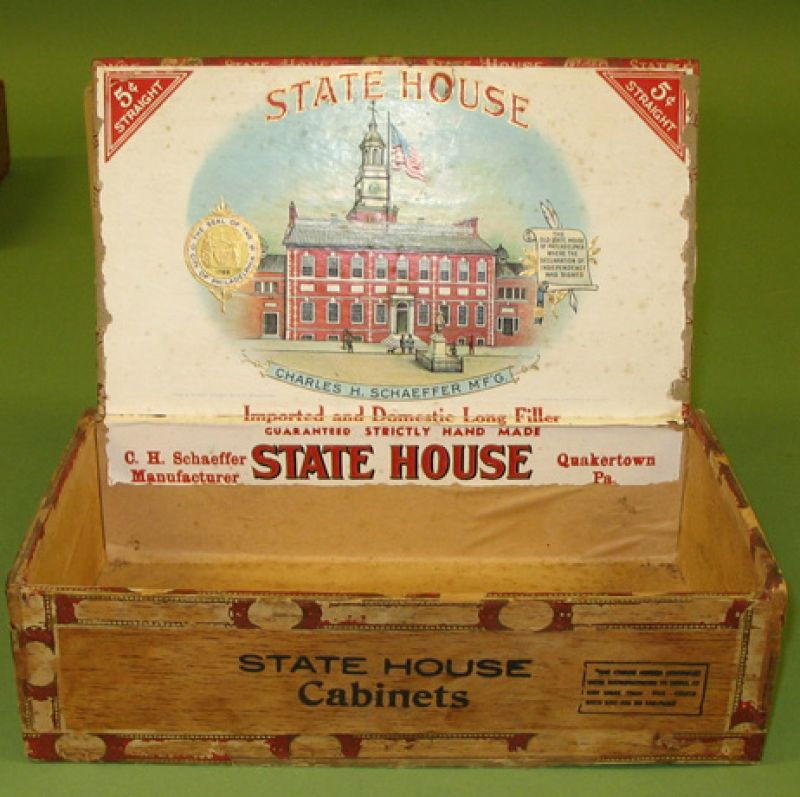 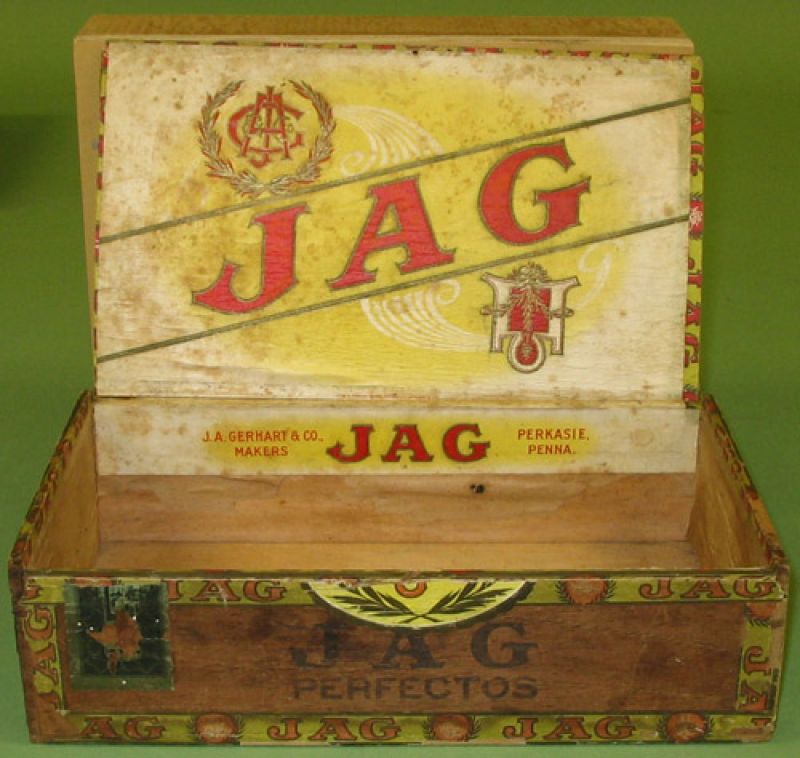 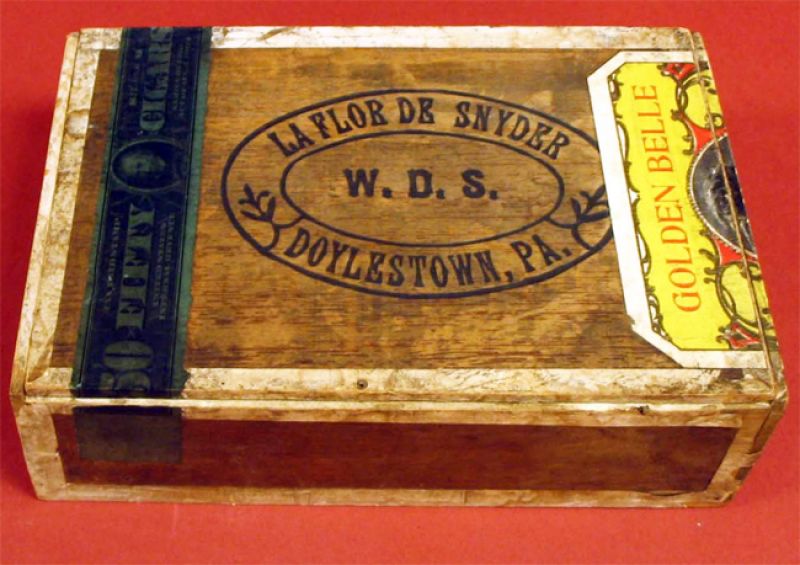 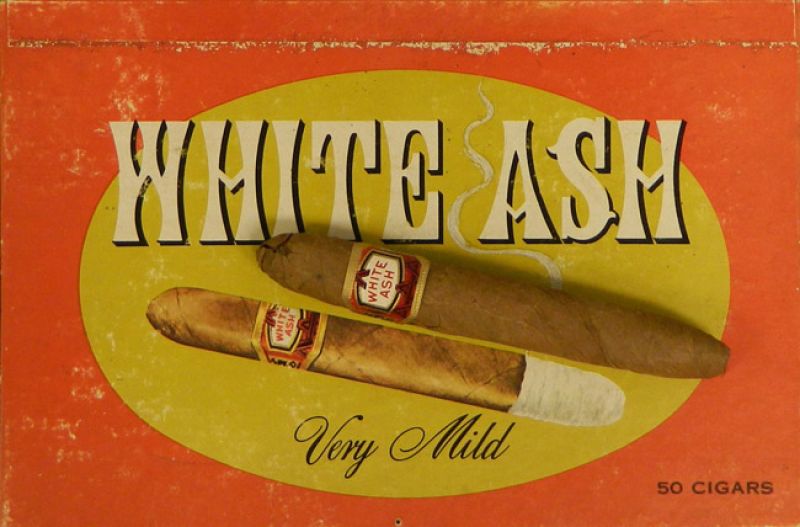 The H.E. Snyder Cigar Factory was located on 4th Street in Perkasie. Snyder held title to the “White Ash” brand, which he marketed locally. 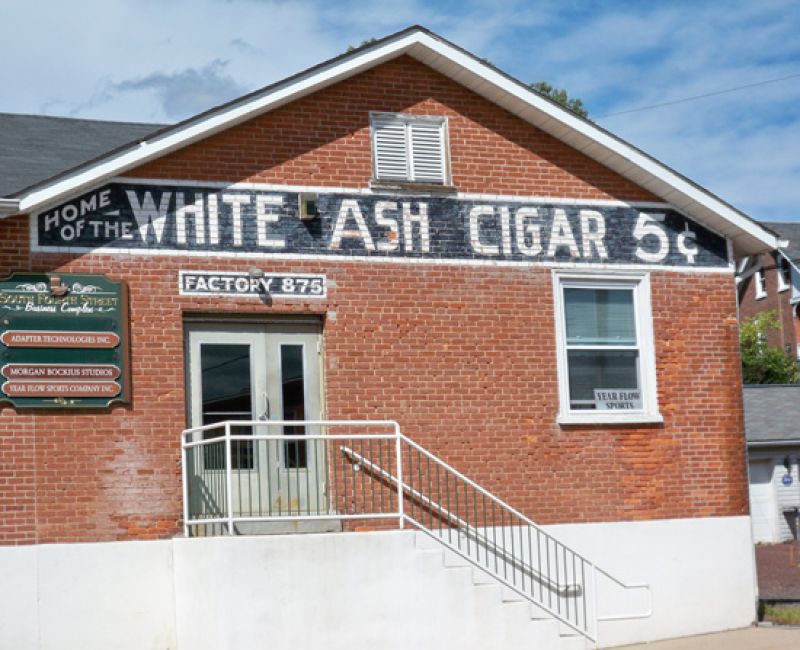 The old Snyder factory building in Perkasie still bears the advertisement for the “White Ash” Cigar. 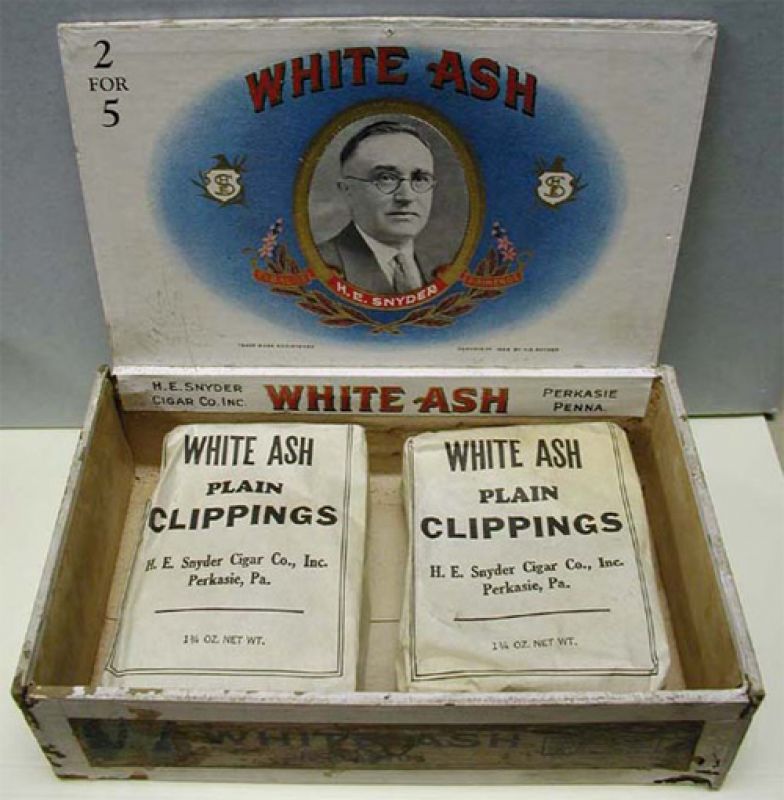 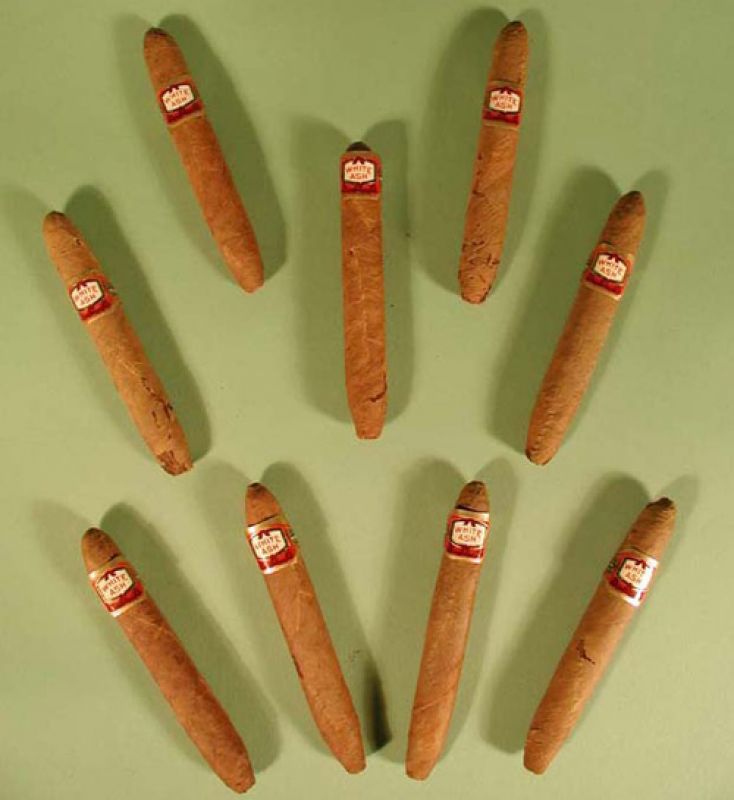 By 1930 the H. E. Snyder Company had installed labor saving machines to wrap finished cigars in cellophane and band them automatically. That same year Snyder was turning out 1 million cigars every 10 days.  This photo shows cigars rolled at the Snyder factory in Perkasie. 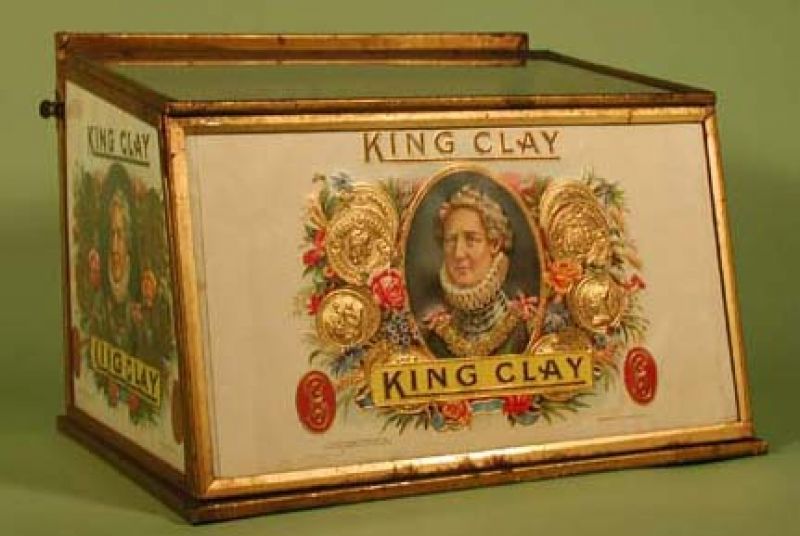 To attract attention and promote their products, cigar makers provided merchants with colorful and decorative racks and counter displays.  Illustrated here is a countertop sales display for “King Clay,” a 5-cent cigar produced by the H. Sommer Company in Quakertown. Sommer also produced a higher priced “El Pax” smoke. Sommer’s was the largest manufacturer of cigars in the early years of cigar-making in Bucks County. 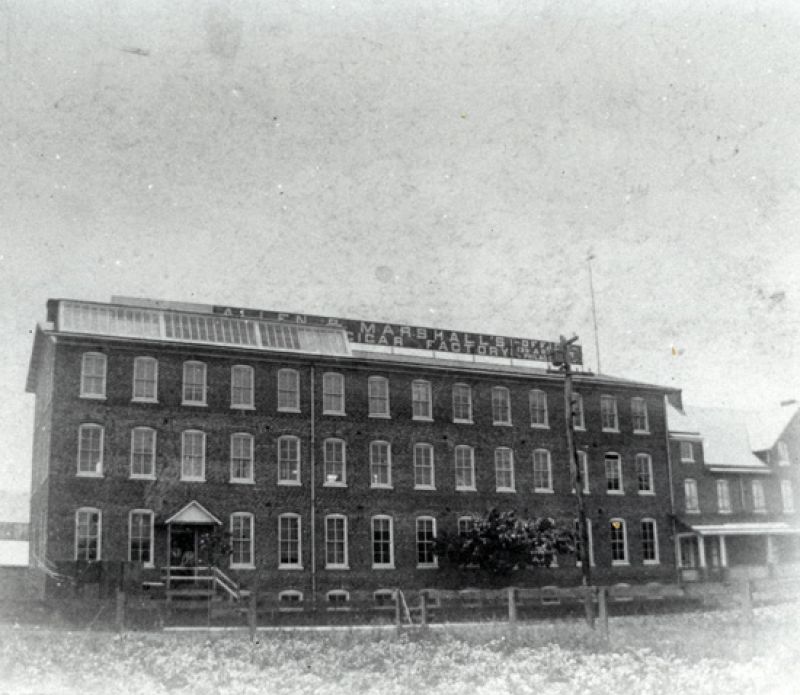 Who were the people who worked in the cigar factories of Bucks County? Thanks to a descendent of one of these workers, the Mercer Museum has an interesting account of the life and career of Clara Ely Texter, a cigar maker at the Allen & Marshall factory in Quakertown (pictured). 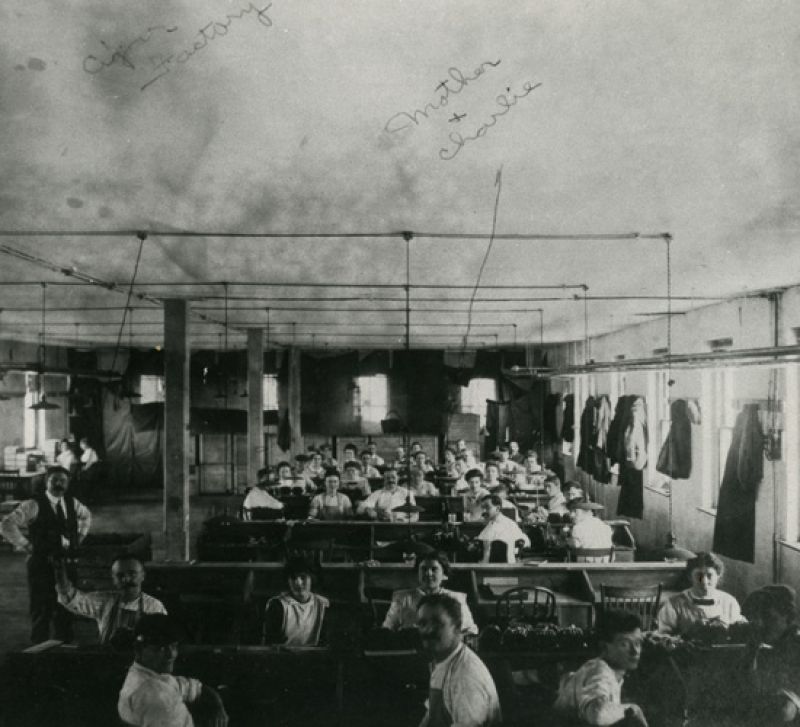 Widowed at an early age, Clara Texter was the mother of five children. Only one lived to adulthood.  Texter went to work at the Allen & Marshall factory following her husband’s death.  Workers at the time were paid by the piece.  A fast worker, according to her descendant, Mrs. Texter saved enough money to buy her own home and help other family members as well. Ironically, she was strongly opposed to smoking and drinking.  In this photo, Clara Texter is seated third from the left, just behind the table in front. 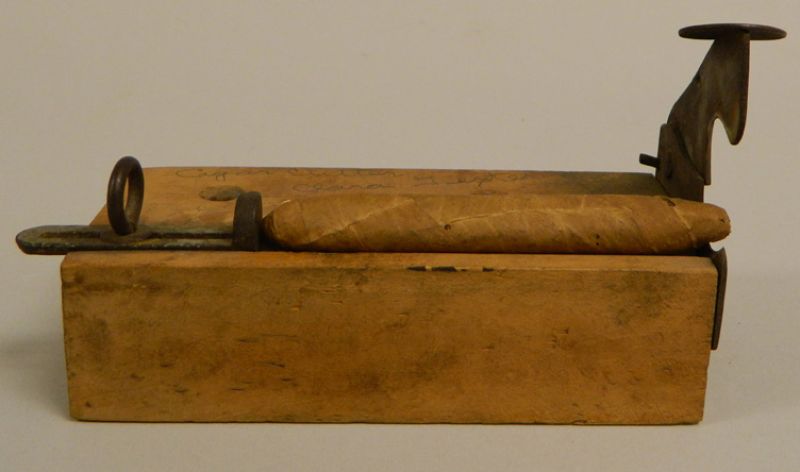 A Tool of the Trade

Clara Texter employed this shaping and cutting tool at the Allen & Marshall Factory. 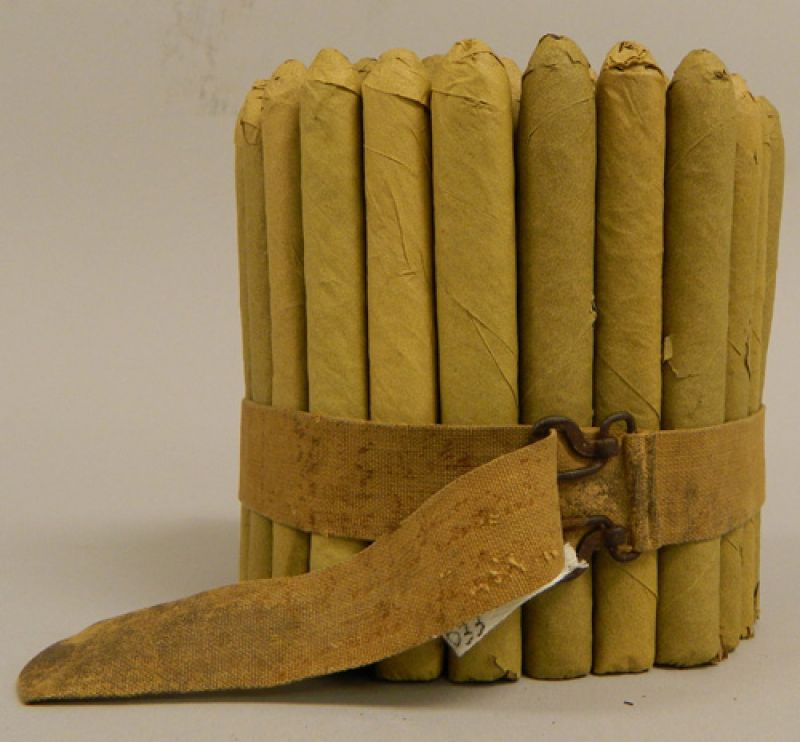 In 1924, Greer Sheetz spoke before the Bucks County Historical Society about the trade of cigar making. Here are excerpts from his presentation:  “Some cigar makers preferred to make a cigar from start to finish—others paired up and one became a ‘buncher’ and the other a ‘wrapper.’ It was the buncher’s job to go to the stock counter for the tobacco.…After he had fashioned it into the proper length and thickness he rolled it into the binder leaf and then twisted the ends of the binder leaf tightly to hold it in place…The wrapper’s board was equipped with a gauge and a cutter. His main job was to roll the unfinished cigar into the wrapper leaf in such a manner as to give it a seamless appearance with a smoothly tapered head…After he had finished 50 cigars he assembled them in a bundle held together with a tape which had his number on it.” The best cigar makers could produce 500 cigars in a ten-hour day; a team could make 1,000 in the same time.

To support the cigar-making industry, entrepreneurs also established cigar box factories in Bucks County.  Pictured here are workers and a delivery wagon of the Monroe Jarrett Cigar Box Factory in Trumbauersville. The factory, built in 1885, burned down ten years later, but was immediately replaced with another building at 19 East Broad Street. It later became the Puritan Paper Plate company around 1930. 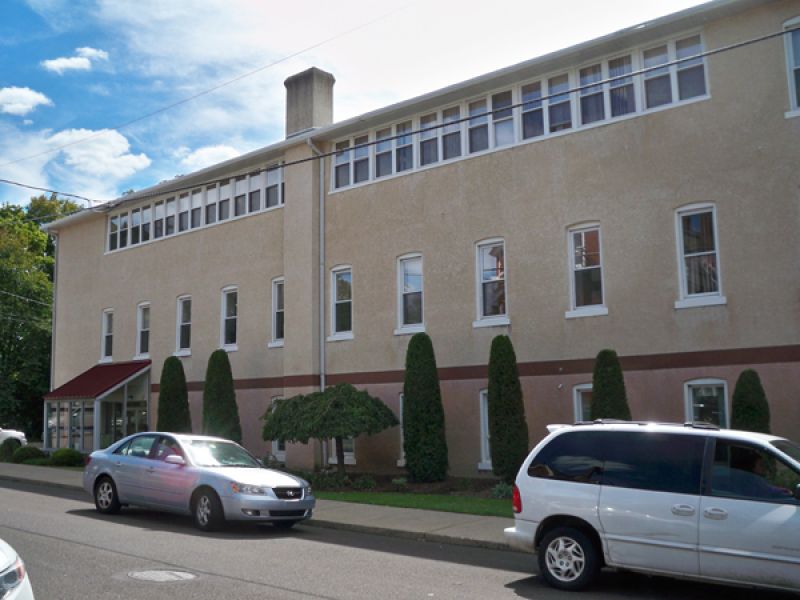 The old Roig and Langsdorf Cigar Company factory at 8th and Chestnut Streets in Perkasie is one building that still remains and has been renovated. 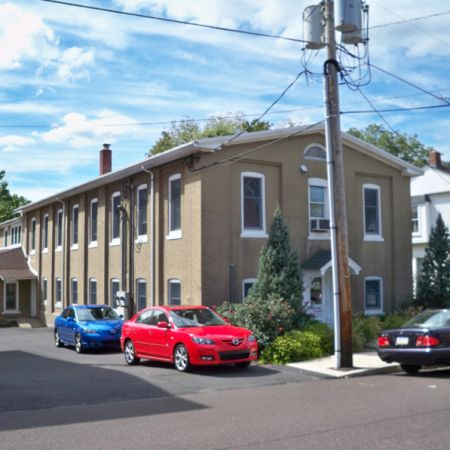 Explore further the rich history of cigar making in Bucks County with a visit to the Mercer Museum and Library. You might be surprised by some of the characters you’ll run into—like this chap who used to stand in front of a cigar store in Philadelphia.