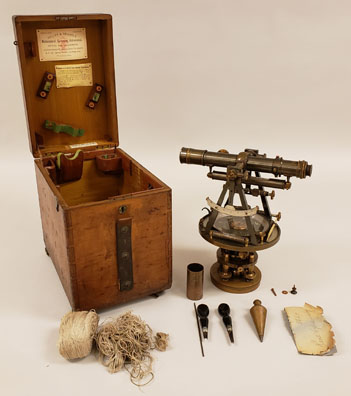 A selection of gifts to the Mercer Museum collections is highlighted in this online exhibit.

This shingle cutter is circa 1934-1950 and was manufactured by the Specialty Tool Manufacturers in Belleville, Illinois. The donor's grandfather, Hans Scheich (1908-1989), immigrated to the United States from Germany when was he was 17 years old and later lived in Croydon, Bucks County. He first boarded with a family in Bristol, where he was employed as a knitter in a hosiery mill. By 1940, he was married with one child and still employed in the hosiery mill. According to the donor, he later became a union carpenter who worked for various contractors, including William Levitt. Many of the houses he built used asbestos shingles, which he cut using this shingle cutter. (Gift of Janet Anderson, 2019) 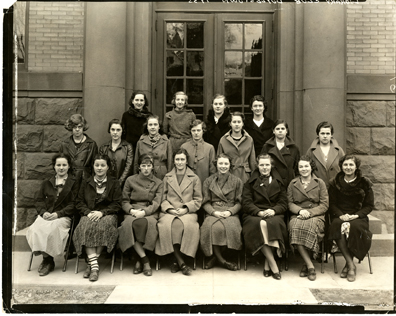 This photograph of the members of the Doylestown Library Club was taken in 1932. (Gift of Clint Flack, 2019) 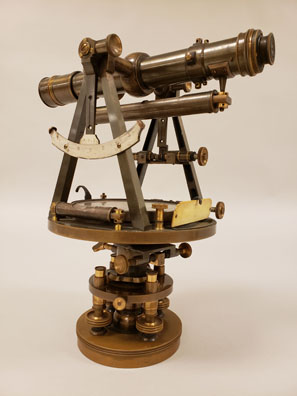 This transit, sometimes called by the name of a similar instrument, a theodolite, was manufactured by the Philadelphia company Brightly & Heller. The company was founded in 1870 and made surveying and engineering instruments. The serial number on the transit, #5664, indicates that it was made around the mid-1880s. At this time, the company employed only a small number of craftspeople and handmade each instrument. The transit was later owned by the donor's maternal uncle, Eugene Burgess, a hydraulic engineer for the State of California. He did site work on the waterways around California in the 1930s and 1940s. The instrument is used by surveyors to measure horizontal and vertical angles. This transit also came with a wooden tripod. (Gift of Mr. and Mrs. Art Brownell, 2019) 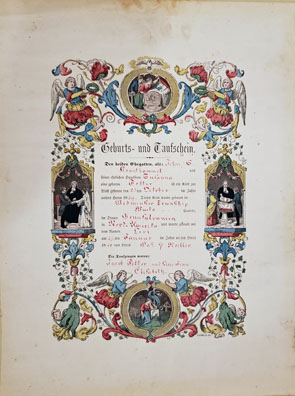 This is a Fraktur Geburts-und Taufschein (baptism certificate) for a baby named Levi who was born on October 27, 1839, in Bedminster Township, Bucks County, Pennsylvania. His parents were John G. Krauthammel and Susanna and the witnesses were Jacob Fetter and his wife Elisabeth. (Gift of the Crouthamel Family, 2019) Translated, the text of the fraktur reads: "Childbirth and Baptismal. To these honored parents, known as: John G. Krauthammel and his wife Susanna, nee Fetter, a child was born into the world on the 27th of October in the year of our Lord 1839. The child was born in Bedminster Township, Bucks County in the state of Pennsylvania in North America, and was baptized with the name Levi on the 27th of January in the year 1840 by Mr. Pastor Roeller. The baptismal sponsors were Jacob Fetter and his wife Elisabeth." 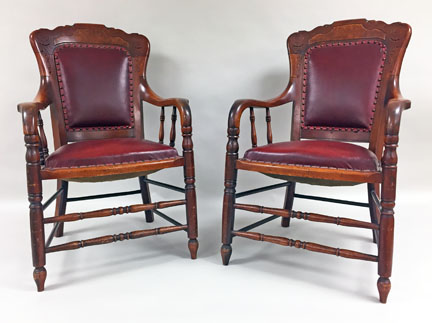 These chairs were part of a set of jury chairs used at the 1877 Bucks County Courthouse in Doylestown, Pennsylvania. They were likely re-upholstered at some point in the twentieth century. See #25668 for a jury chair from the 1812 Bucks County Courthouse. See also Mercer Museum Archives collection, postcard SC-36, 08-C-30, for a view of the interior of the courthouse showing the chairs. (Gift of the Estate of Edwin William White) 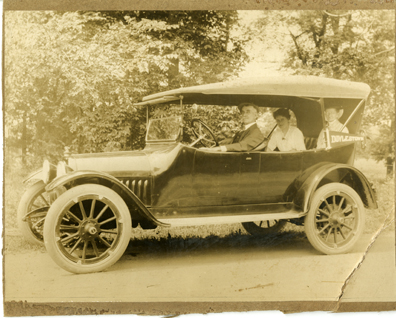 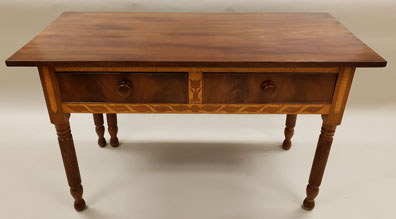 This table was made by Isaac Rapp, a carpenter in Erwinna, Bucks County, around 1837. Rapp was born to George Rapp and his wife Maria on November 29, 1814, and christened at St. Luke's in Nockamixon, Bucks County, on January 15, 1815. He married Susanna Overpeck (December 12, 1819 - May 1, 1901), and the couple had a daughter named Emma or Emaline, born in 1841. Rapp is listed as a carpenter in the Tinicum Township censuses from 1850 to 1870. He died on August 23, 1879. Rapp may have made this server table for his wife, perhaps even as a wedding gift. A pencil inscription and label behind its left drawer states that it was purchased by Mary Katherine and Taylor Matson in 1914 from an "M Rap" at Erwinna, Pennsylvania. "M Rap" maybe Millie or Emaline Rapp, daughter of the maker, Isaac Rapp. (Gift of David Long, 2019) 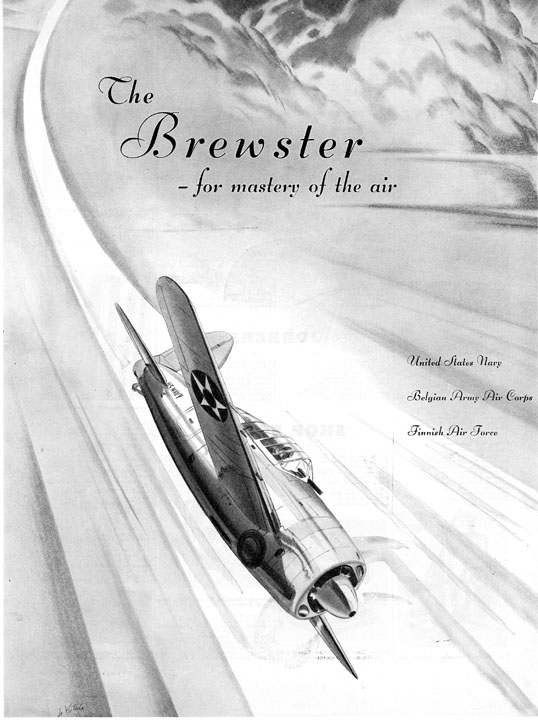 The Brewster Aeronautical Corporation was an American defense contractor that operated from the 1930s until the end of World War II. Brewster started out making seaplane floats and wing panels but eventually started creating original designs. It operated three aircraft plants, in New York, New Jersey, and, in 1941, in Warminster Township, Bucks County, Pennsylvania, which was then known as NAS Johnsville. (Gift of Clint Flack, 2019) 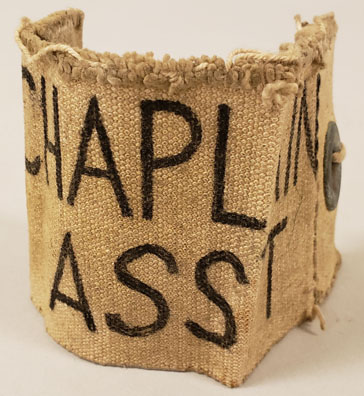 This armband belonged to the donor's father, Wilbur H. Johnson, a chaplain's assistant during World War II. Wilbur Houseman Johnson was born June 6, 1911, in Somerton, Philadelphia, Pennsylvania to parents Reverend Harry R. Johnson and Elizabeth Dull. He graduated from Upper Moreland High School in Willow Grove, Montgomery County, Pennsylvania, and earned his bachelor's degree in Public School Music from West Chester University in West Chester, Chester County, Pennsylvania. He earned his Master's Degree from the University of Pennsylvania and also attended Combs Conservatory of Music in Philadelphia for two years. Wilbur Johnson married Norma DeRemer Johnson (May 26, 1923-December 6, 2013), and they had two children, Barbara and Edward. Wilbur served in World War II for three years. He was a Methodist Chaplain's assistant and organist, serving in Company H & S, 1637th Engineers Construction Battalion, Engineer Training Section, ASFTC at Fort Lewis, in Tacoma, Washington. He toured Germany, France, and the Philippines. After the war, the Johnson's settled primarily in Morrisville, Bucks County, Pennsylvania. Johnson retired from teaching in 1975, after a career of 42 years. Wilbur was also choirmaster of the St. Paul United Methodist Church in Trenton, New Jersey for 30 years. Wilbur Johnson died December 3, 2003, and is buried in Newton Friends Meeting Burial Grounds. See also MSC 852, in the Mercer Museum Library, for a scrapbook from Wilbur Johnson's WWII service. (Gift of Edward B. Johnson, 2019) 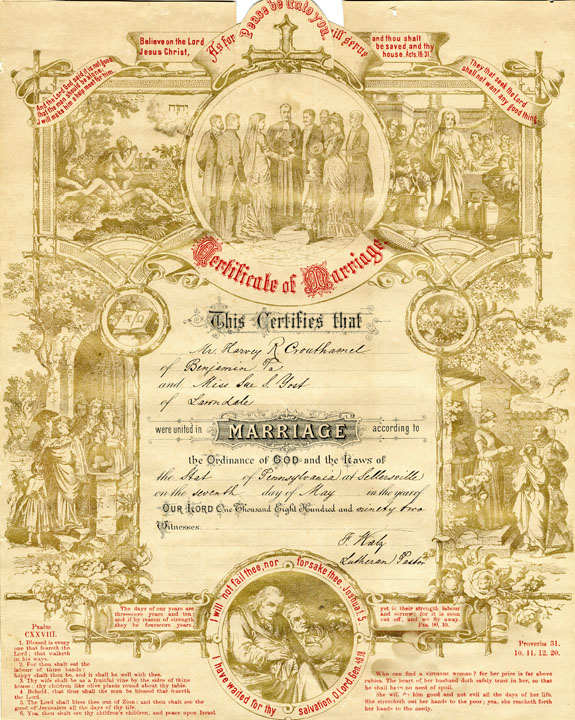 This marriage certificate unites Harvey R. Crouthamel of Benjamin, Pennsylvania and Sue S. Yost of Lawndale, Pennsylvania. They were married in Sellersville, Pennsylvania on May 7, 1892. Harvey was the son of Levi and Rebecca Crouthamel. Sue’s parents were Henry and Julian Yost. (Gift of Crouthamel Family, 2019)