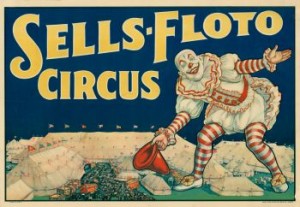 In an era spanning the early 20th century, through depression ridden times, a dust bowl, and the Red Scare, one form of revelry thrived – the circus. The Big Top was a thrilling spectacle that burst into towns along the American road and railways. Traveling from coast to coast, rail cars packed with canvas, exotic animal menageries, strongmen, fat ladies, and roustabouts brought a much needed relief to millions of Americans. Step Right Up! Behind the Scenes of the Circus Big Top, 1890 – 1965 explores a history fraught with intrigue and majesty and gives viewers their chance to run away with the circus. In collaboration with the Tegge Circus Archives, Step Right Up! takes viewers behind the scenes of the circus, exploring the dramatic pageantry, colorful past, and living presense of this grand American theatrical tradition. On display are dozens of colorful posters, costume artifacts, photographs and oral histories from past performers. The exhibit is being traveled by ExhibitsUSA, a national division of the Mid-America Arts Alliance and the National Endowment for the Arts. 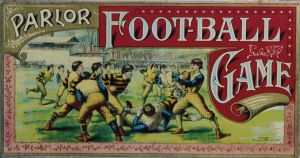 Hands-on exhibit invites kids of all ages to explore and play games from around the world and across the centuries. As visitors play together, they not only have fun, they also learn cooperation, build skills, gain knowledge, and share memories. Included are games of strategy, math, luck and physical coordination. The focal point of the exhibit is an oversized chess board with giant playing pieces. Also included is a “House of Cards” play area, where visitors can try out a variety of other board games while enjoying the exhibit. Accompanying the interactive portion of the exhibit is a display of original board games from the 1800s and early 1900s, from the Judy and Bud Newman Collection. These early games feature stunning color lithography, interesting playing pieces, and intriguing content. Playing Together: Games was designed and built by the Children’s Museum of Memphis for the Youth Museum Exhibit Collaborative.

America’s Road: The Journey of Route 66 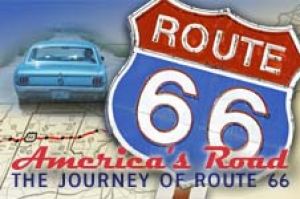 This exhibit takes visitors on a geographical and historical tour of the iconic highway, from the highway’s opening in 1926, up to the present day. Graphic displays, props, artifacts, interpretive text, and interactive experiences – including a drive-in theater and a period radio show – help deliver the story. Themes include American migration, the evolution of automotive travel, roadside architecture, and technological and cultural innovation. Included, too, with the exhibit is a photo essay created by photographer and author Russell Olsen. Olsen researched and photographed 75 classic service stations, motor courts, restaurants and other sites along Route 66. The Mercer Museum will augment the exhibit with vintage automobiles and other items of automotive culture. On display, will be a 1969 Mercedes 600 (short-wheelbase), once owned by Elvis Presley. Route 66 is produced and traveled by NRG! Exhibits of Kirkland, Washington.

For All the World to See: Visual Culture & the Struggle for Civil Rights 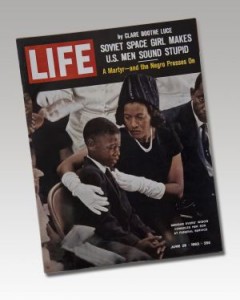 The exhibit examines the role that visual culture played in shaping and transforming the struggle for racial equality in America from the late 1940’s to the mid-1970’s. Through a compelling assortment of photographs, television clips, art posters, and historic artifacts, For All the World to See traces how images and media disseminated to the American public transformed the modern civil rights movement and jolted Americans, both black and white, out of a state of denial or complacency.  Also on view, the companion exhibits: The Negative Imagery of Race: 100 Years of Stereotyping and A Selection of Quilts by Linda Salley in Honor of the African American Museum of Bucks County.

Exhibit is made possible through NEH on the Road. Adapted from an original show organized by The Center for Art, Design and Visual Culture, University of Maryland, in partnership with the National Museum of African American History and Culture, Smithsonian Institution.