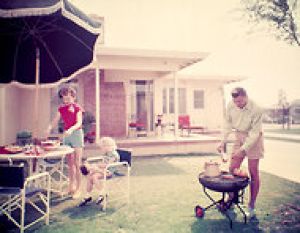 What makes a house a home? Throughout American history, people have lived in all sorts of places, from military barracks and two‐story colonials to college dormitories and row houses. The exhibit embarks on a tour of houses both familiar and surprising, through past and present, to explore the varied history, and many cultural meanings of the American home through film clips, construction materials, domestic artifacts, and photographs

This exhibition has been made possible through NEH on the Road, a special initiative of the National Endowment for the Humanities. It has been adapted and is being toured by Mid-America Arts Alliance. House & Home was organized by the National Building Museum, Washington, D.C., and curated by Sarah Leavitt. Additional support was provided by the Home Depot Foundation.

AIA Bucks County – A Chapter of the American Institute of Architects 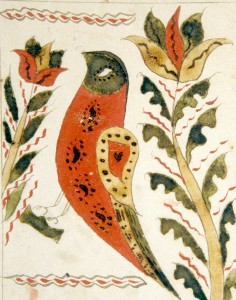 In 1997, the Mercer Museum presented a major exhibit featuring the Pennsylvania-German color drawings and decorated manuscripts known collectively as Fraktur. Though this folk art form was produced nearly everywhere German immigrants settled in America during the eighteenth and early nineteenth centuries, the museum’s exhibit focused on those created primarily in Bucks County. This winter, in conjunction with other exhibits at the Philadelphia Museum of Art and the Free Library of Philadelphia, the Mercer will mount an exhibit featuring Fraktur pieces acquired by the museum since 1997. These embellished manuscripts were executed by schoolmasters, itinerant scriveners, ministers, and others skilled with pen and brush. On view will be decorated birth and baptismal certificates, student penmanship models and copybooks, rewards of merit, devotional texts, bookplates, and more. 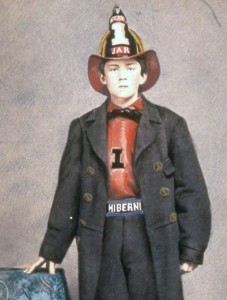 For more than 100 years, firefighting was the responsibility of every neighborhood and citizen. The city’s fire companies fervently believed that fighting fire was a community responsibility, best performed by virtuous and heroic men. Paid fireman finally replaced volunteers in 1871, signaling a change in beliefs about public service.

The Mercer Museum’s engaging exhibition will include more than 175 historical firefighting artifacts including tools, colorful parade regalia, apparel, artwork, photographs, fire engines and fire equipment, and other unique items from the Museum’s permanent collection. The all-ages exhibit will also feature hands-on activities for children. The exhibit is included with museum admission.  Visit the Events Calendar to learn about Firefighting exhibit-related programs and craft activities. 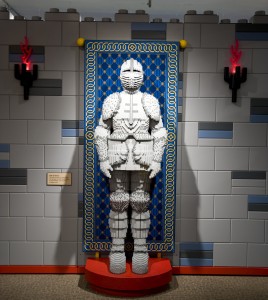 Builders of all ages are invited to the Mercer Castle to construct their very own castles using one of the greatest building materials of all time−LEGO® bricks!  Produced by The Children’s Museum of Indianapolis in cooperation with LEGO Systems, Inc. LEGO and the LEGO logo are trademarks of the LEGO Group © 2015 the LEGO Group.  All rights reserved.

For more information on the exhibit, visit our LEGO Castle Adventure Events page.

• Effective Thursday, January 6, 2022, face coverings will be required for anyone inside our buildings. Learn more about our Covid-19 policies.
+