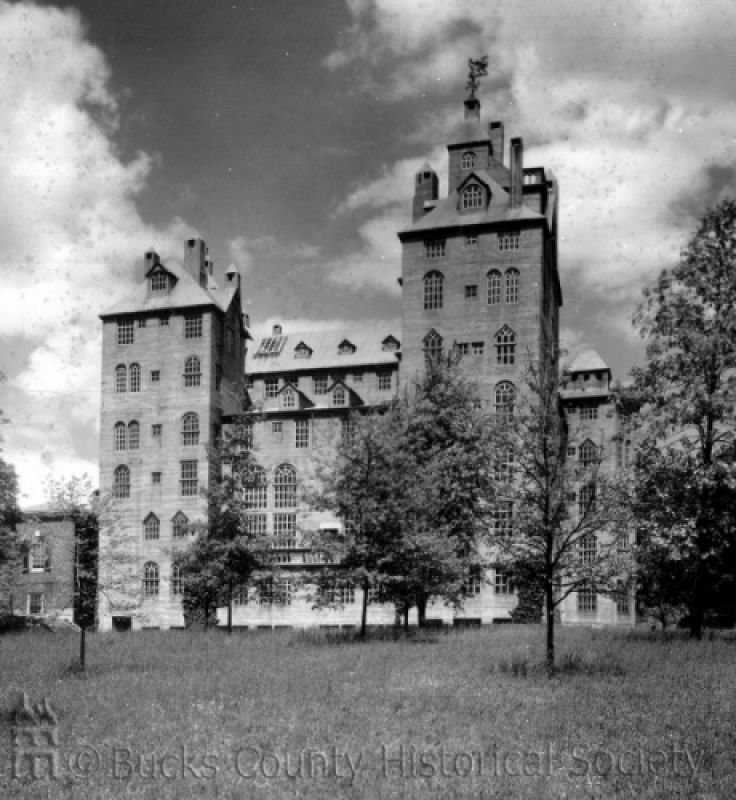 From A New Point of View: Mercer Museum Beginnings

The Mercer Museum, housing tools and other artifacts of America’s pre-industrial past, was designed and built between 1913 and 1916 under the direction of Henry Chapman Mercer of Doylestown, Bucks County, Pennsylvania. 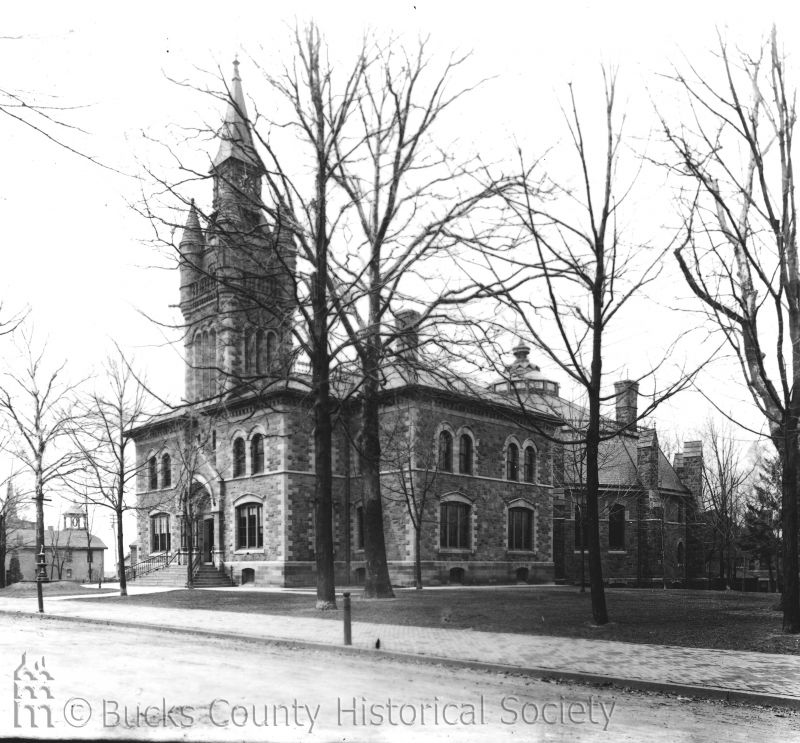 In the year 1897, the Bucks County Courthouse in Doylestown (left) hosted an unusual exhibit. Considered unconventional for the time, it displayed hand tools and other everyday objects of the 1700s and early 1800s. Many people were surprised to find common eating utensils, hunting rifles, axes, lanterns, and farming equipment displayed as historical artifacts. 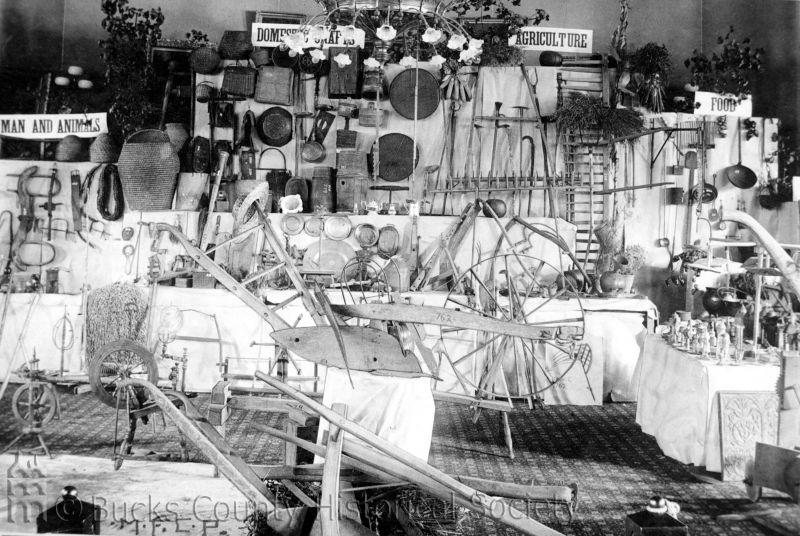 The Tools of the Nation Maker

Henry Chapman Mercer, a Doylestown-born historian and archaeologist, and a founding member of the Bucks County Historical Society, created this novel exhibit, which he called The Tools of the Nation Maker. Mercer had the foresight to recognize that with the rise of industrialization, these hand tools that had helped early settlers solve problems of food, clothing and shelter would soon disappear. This image, and one that follows, shows the original installation of Mercer's exhibit in the main courtroom of the Bucks County Courthouse. 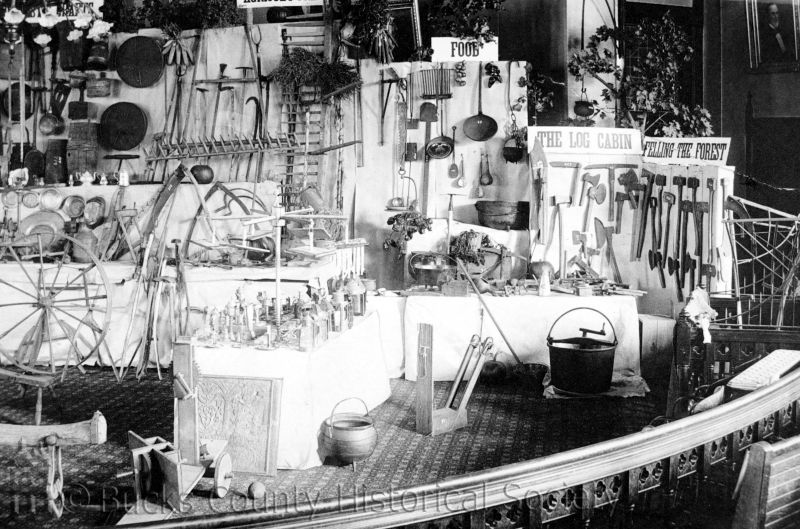 A Fresh Point of View

Mercer believed that his Tools of the Nation Maker exhibit offered a fresh point of view on American history. He hoped that people from around the country would realize the importance of this pre-industrial tool collection. Mercer would devote much of the remainder of his life to collecting, preserving, and writing about tools - which he defined broadly as any objects that helped to meet human needs and wants. Observing and studying these tools, he believed, offered the best method of understanding how people once worked, lived and played. 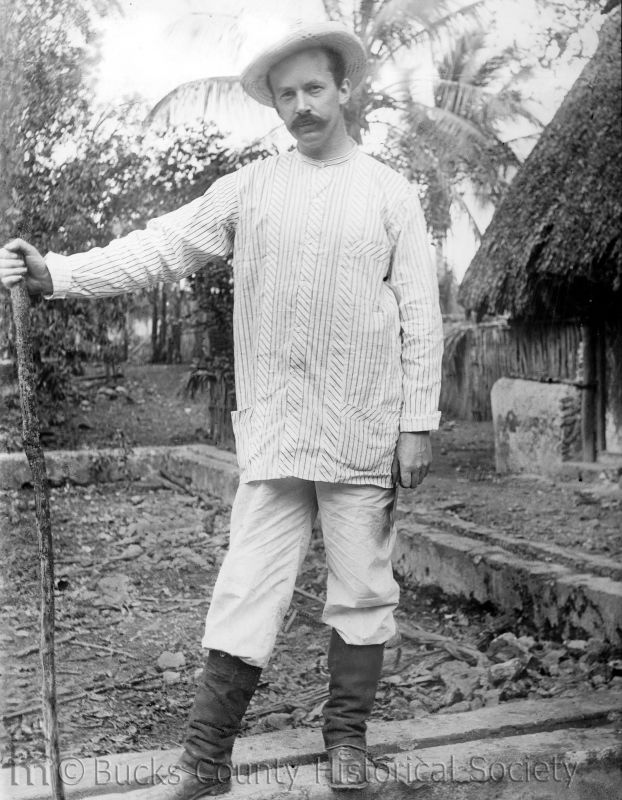 Henry Mercer’s background in archaeology made him particularly attuned to viewing history through artifacts. Beginning in the 1880s, he spent much of his time along the Delaware River searching for evidence of early human activity. While a curator at the University of Pennsylvania’s Museum of Archaeology, he associated with experts in archaeology, paleontology and folklife. Within a few years Mercer become a well known American archaeologist, having established dig sites in both North and Central America. Here Mercer poses while on the Corwith Expedition to the Yucatan Peninsula in Mexico in 1895. 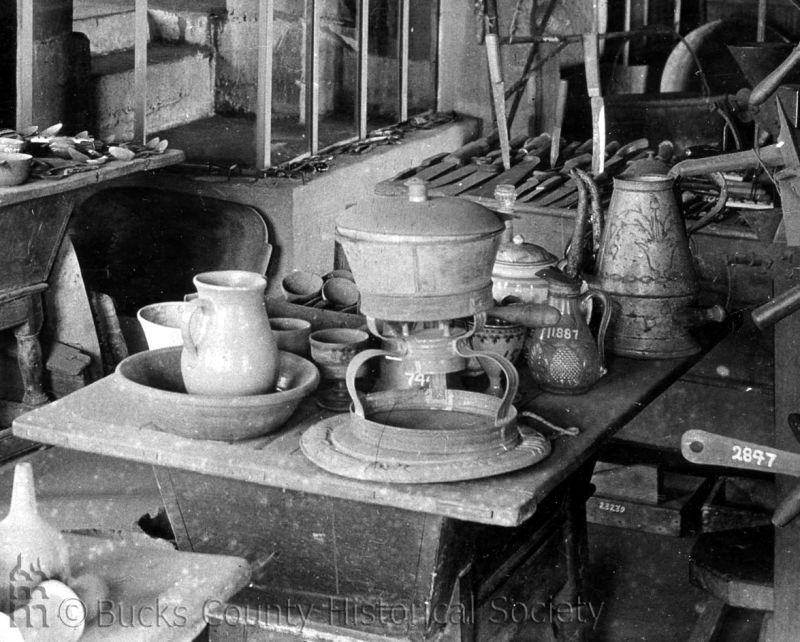 It was in early 1897 that Mercer launched the collection that would become the Tools of the Nation Maker. He started by visiting local junk dealers, and attending nearby household auctions and country sales. Since most people saw the old tools and other items as nearly valueless, most of these things could be acquired for very little money. "Penny lots" they were often called at local sales. To Mercer, however, these everyday items told important stories. This type of collecting he felt, should be considered another form of archaeology. 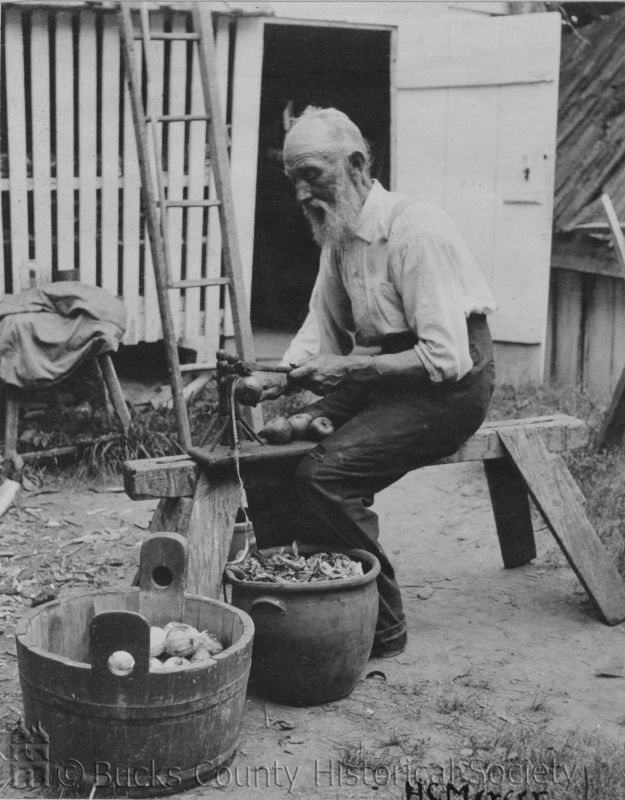 Mercer was interested not just in the tools themselves but also in the way they worked, and what they revealed about the people who used them. “It is the life of the people that is sought to be expressed,” he wrote. To better understand how the tools fit into people’s lives he interviewed older craftsman, wrote down their stories, and photographed individuals at work. In these same years, Mercer also established himself as a ceramist and tile maker. The decorative tiles and mosaics produced at his Moravian Pottery and Tile Works would be installed in homes and public buildings throughout the United States. His image of a farmer peeling apples (at left) inspired one of the mosaics the Tile Works produced and installed in the Pennsylvania State Capitol in 1906. 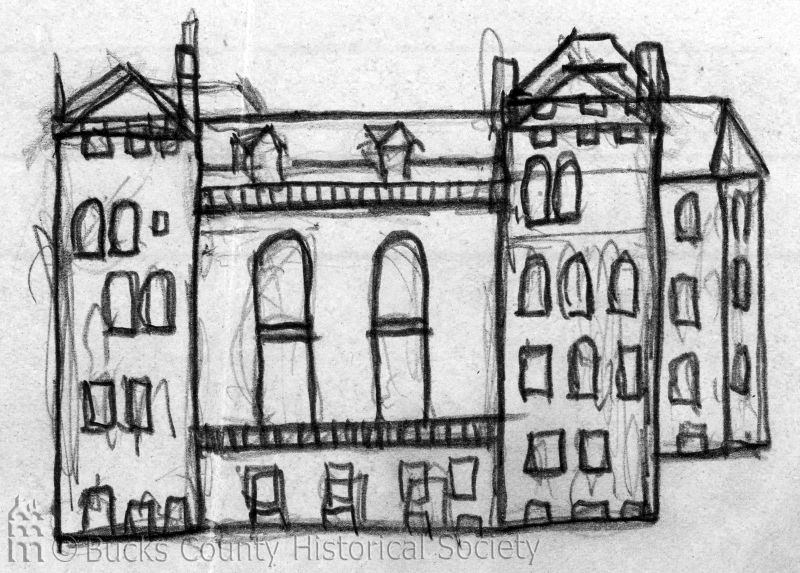 A Museum for the Collection

As Mercer’s collection of tools grew larger, he realized a large building would be needed to house the artifacts. Mercer was able to envision, design and construct this museum thanks to an inheritance from a wealthy aunt, and money acquired from his successful tile business. Construction began in earnest in 1914 and the new Museum of the Bucks County Historical Society, or "Colonial Museum," would ultimately open in 1916. The cost would total $38,944.99. At left is one of Mercer's early sketches of the museum building, from his construction notebook. 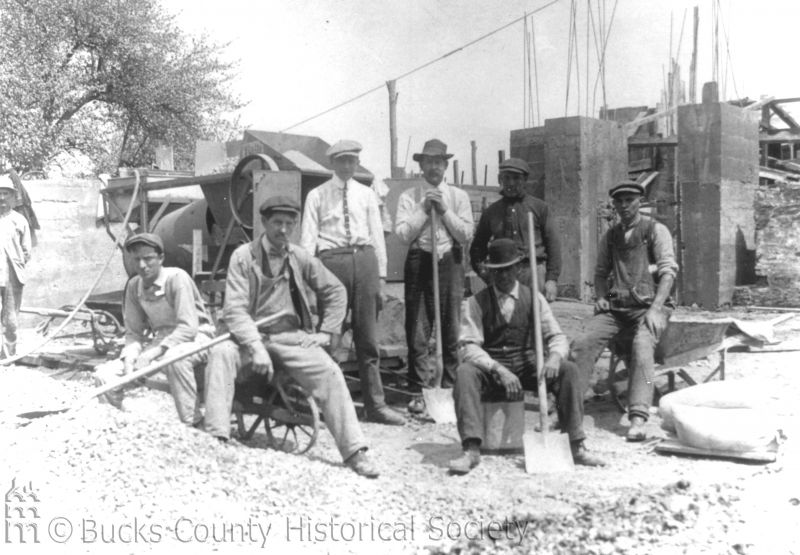 “The building is made of reinforced concrete, that is, stone, cement, and sand, strengthened with steel rods,” explained Henry Mercer. In fact, Mercer was an admirer and booster of concrete as a building material. He had already constructed his home, Fonthill, and his Tile Works from the aggregate. In addition, concrete was relatively inexpensive and could be formed and shaped to his liking. The choice of concrete would also help protect the museum’s contents from fire. In the photo at left, Mercer's work crew stands in front of a small gasoline-powered concrete mixer. Used at the time the picture was taken in 1913 to build the garage at Fonthill, the mixer would also be used in the construction of the museum. 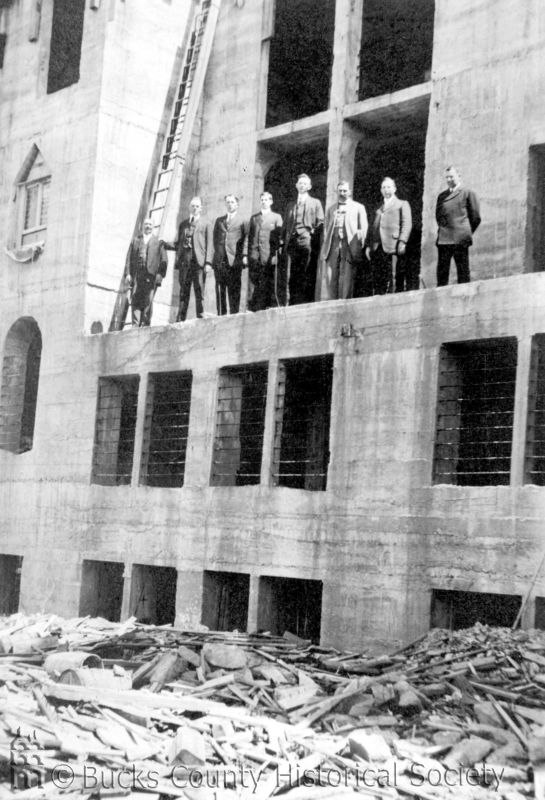 To build the museum, Mercer selected a crew of about eight workmen (seen posing at left on a terrace of the building during construction). The laborers were supervised by foreman William Labs. The men worked sixty hour weeks in almost any weather conditions. The concrete was poured into carefully constructed wooden forms. When the concrete cured, the forms were dismantled and thrown to the base of the museum. Almost every aspect of the museum was built on this principle, even the sections of roof. Window frames where poured separately into clay and plaster molds on the ground, then raised and mortared into place. 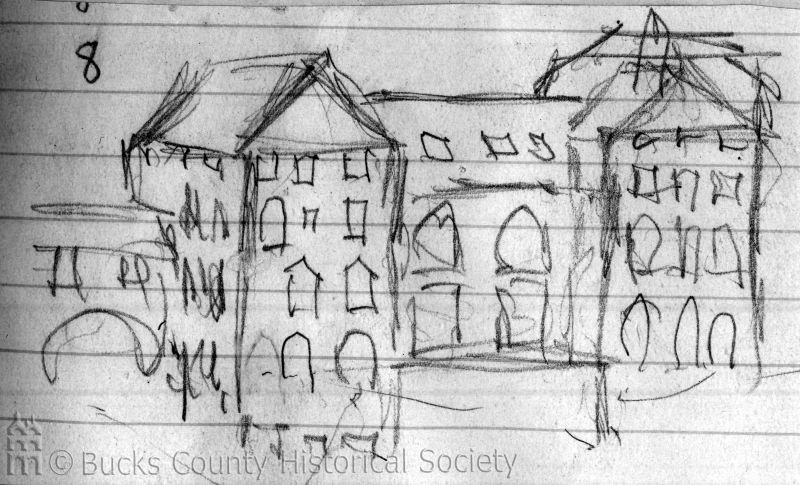 Though not an architect by trade, Mercer knew how he wanted his museum to look and - more importantly - to function. He designed the building from the inside out using sketches rather than formal blueprints. According to workman William Frankenfield, “[Mercer] wanted the building just put up and he described it and that’s the way the foreman got his information….” Mercer verbally coached his eight laborers through the entire building process, and sketched the structure’s framework on paper to get a visual idea of how construction should proceed. Another of Mercer's early sketches of the building's exterior is at left. 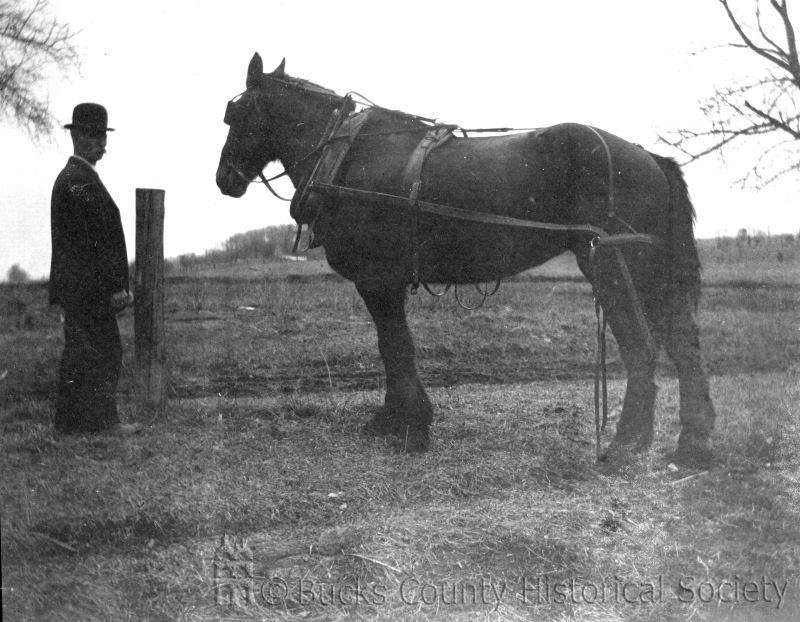 “Lucy”, a workhorse, helped “lift [and] hoist the wheelbarrows up to whatever heights [the laborers] had been working,” recalled William Frankenfield, a member of the original construction crew. Lucy also helped move the cumbersome gasoline-powered concrete mixer around the worksite. The patient horse greatly aided the construction process, and, like the human members of her crew, received a daily wage of about $1.75 a day. 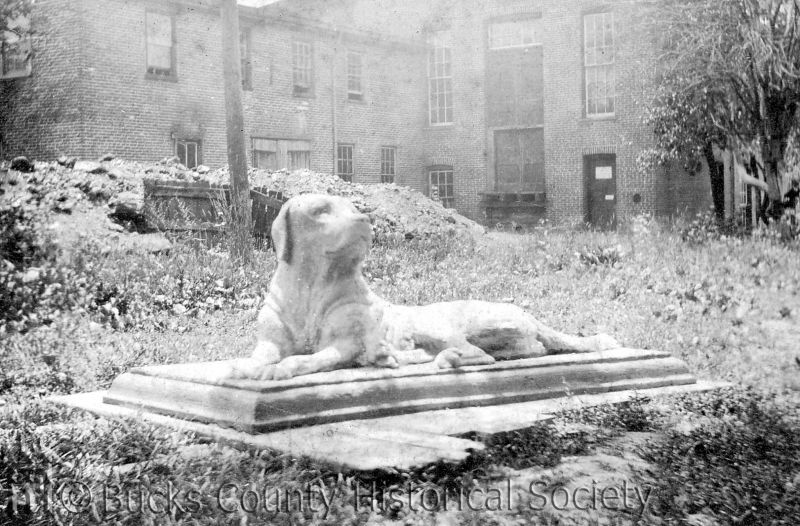 Henry Mercer visited the museum’s construction site daily, often accompanied by his pet dogs. Among them was a Chesapeake Bay Retriever named Rollo, Mercer’s favorite. During construction Rollo managed to stray onto some just-poured concrete steps, frustrating Mercer’s workmen but delighting his owner. Mercer chose not to have the steps redone, and Rollo’s paw prints can still be seen today just as he left them a century ago. After Rollo's death, Mercer apparently had a statue made to commemorate his loyal companion (photo at left). Today, however, it is not known what became of the Rollo statue.

A New Presentation of the Work of Human Hands

Mercer’s new concrete museum adjoined the Bucks County Historical Society's brick Elkins building, constructed between 1904 and 1907 and visible at left in this photo. Though Mercer had a falling out with the Society's officers in the early 1900s, the two had reconciled. Mercer offered to give his growing collection to the Historical Society, if the Society allowed him to construct the building to house it. In presenting the building to the Society, Mercer remarked, “The building is a secondary matter. It was made for the collection, while the collection was not made for it…The one and only objective of the whole work…has been to permanently display, preserve and enlarge what might be called a new presentation of the history of our country, from the point of view of the work of human hands.” 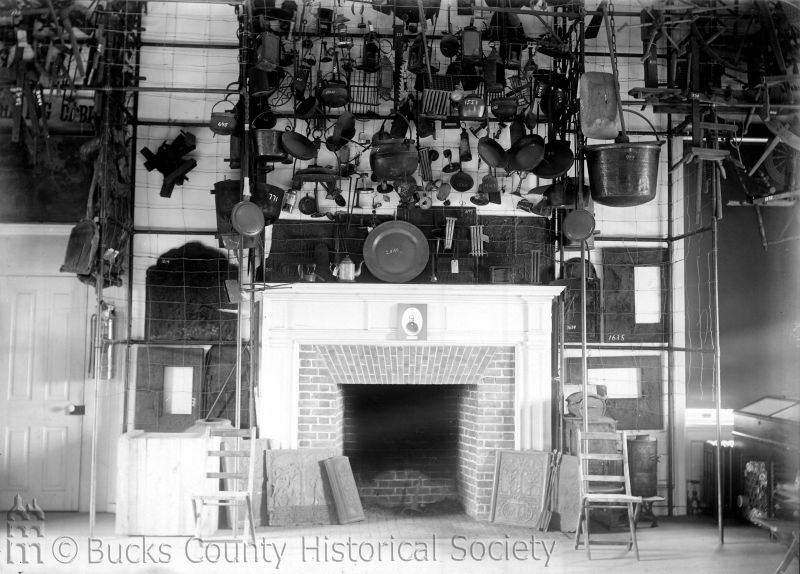 This image shows part of Mercer’s original collection, given previously to the Bucks County Historical Society, installed in the Society's Elkins Building about 1910. Mercer’s concerns about the need for more space and the lack of fireproofing inf the Elkins structure led him to propose construction of the new museum. The suspension of artifacts from the walls and scaffolding in Elkins, seen in this photo, foreshadowed the look of exhibits in the new museum. 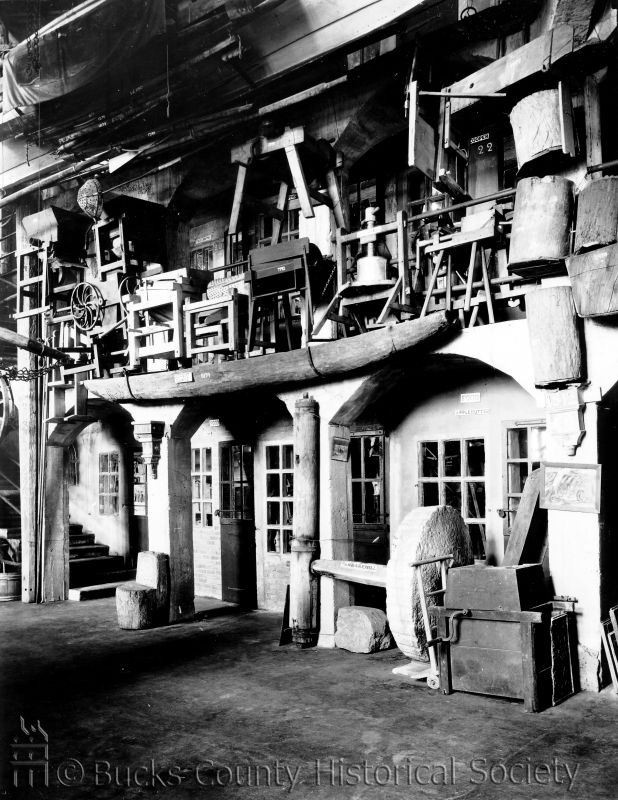 Henry Mercer designed the new museum specifically to display his tool collection. Floors of varying heights, and rooms of various sizes were intended to accommodate an array of artifacts. Everything from a large whaling boat to the smallest nail had a place in the building. Many of the larger artifacts were suspended from the ceiling or walls so that visitors would get a thoroughly fresh perspective on these everyday tools of the past. Hanging the artifacts also helped to clear floor space. Meanwhile, the many windows located throughout the museum provided natural light for visitors to view the collection. 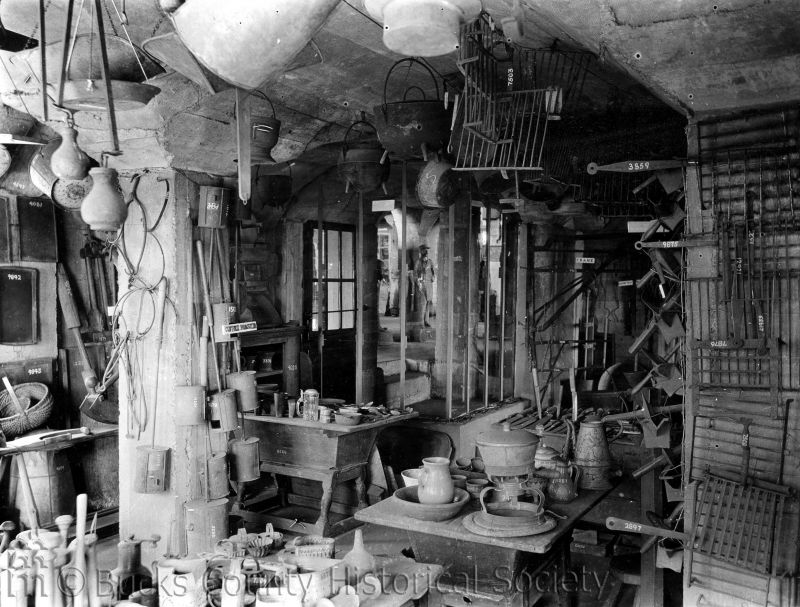 Early photographs of museum exhibits often show rooms densely packed with artifacts, seemingly with little attention to order or organization. While it is true that Mercer probably devoted more attention to collecting and research than he did to the structure of the exhibits, he did have a very methodical way of organizing the museum's collection into a larger framework or system, which he called, “Historic Human Tools.” Mercer also devised plaster and tile signs to label various classes or groups of tools, and wrote a series of guides to museum exhibits that made connections between various types of artifacts, explaining the importance of even the smallest of objects. 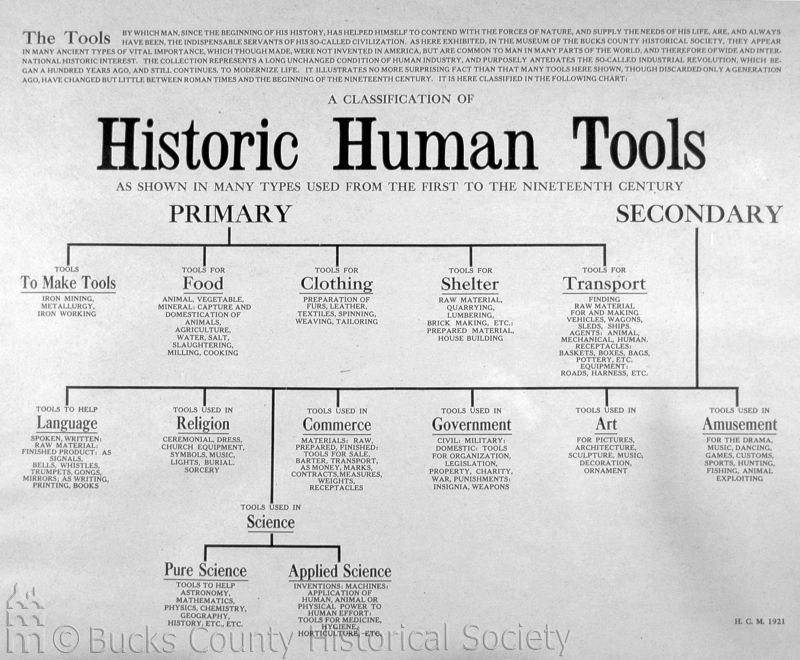 Henry Mercer’s “Historic Human Tools” classification system grouped artifacts into either “primary” or “secondary” categories. Primary tools were used for human necessities such as food, clothing, shelter, for making tools, and for transportation. Mercer’s secondary tools were those for language, art, amusement and government. Originally, the lower levels of the museum housed primary tools while the upper floors of the museum contained secondary tools, representing a sort of “hierarchy of human needs and wants” in the castle-like structure. 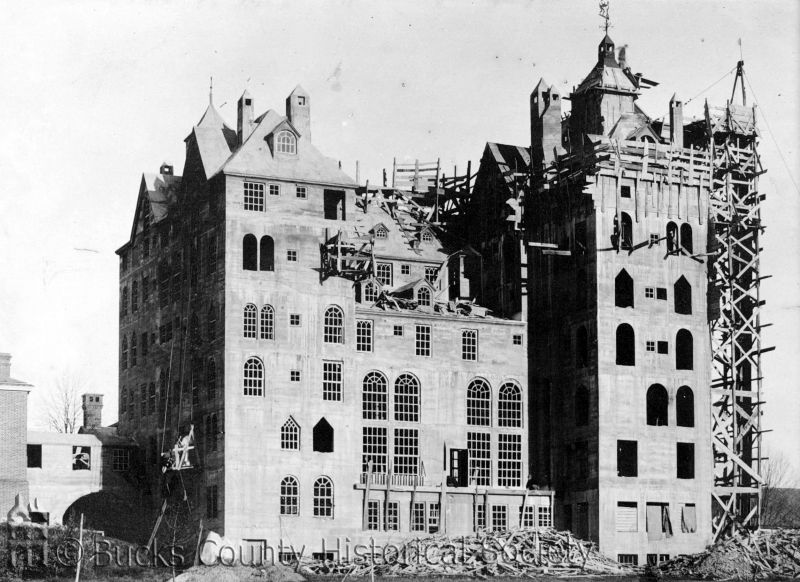 On Saturday, November 13, 1915, the construction of the new museum building was completed according to Mercer's notes. By happenstance, a traveling German band stopped at a house across the street and struck up the tune, “We Have Built a Stately House.” The song's lyrics, according to Mercer, continued: “and have dedicated it [the house] to God against rain, storm and disaster.” Mercer was delighted by this chance performance, viewing it as a perfect omen for his museum’s future.