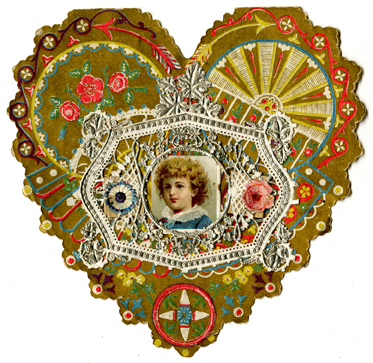 The Art of Love: Historic Valentines

Valentine’s Day has been observed for thousands of years, and while it has evolved over time, the holiday has remained a celebration of love. Once it was customary to give a token of love such as a pair of gloves or a spoon carved by your sweetheart but by the 1600s paper valentines became the fashion. Valentines given in the United States during the 1700s up to the 1840s were commonly handmade and delivered by hand. By the 1840s, mass-produced valentines that were lithographed and hand colored revolutionized the holiday and heralded a new age of valentine art. Some were decorated with frothy paper lace or embellished with bits of silk, but all were given with hope to their chosen valentine. 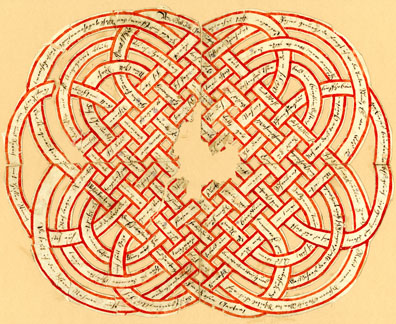 Fraktur designs were created by the Pennsylvania German and used lettering based on early Gothic or medieval typeface. The designs were usually pen and ink and brightly colored. Pennsylvania Germans were early adopters of celebrating Valentine’s Day. This particular Fraktur valentine is from the museum collection and is an example of a Lover’s Knot or Endless Knot of Love. 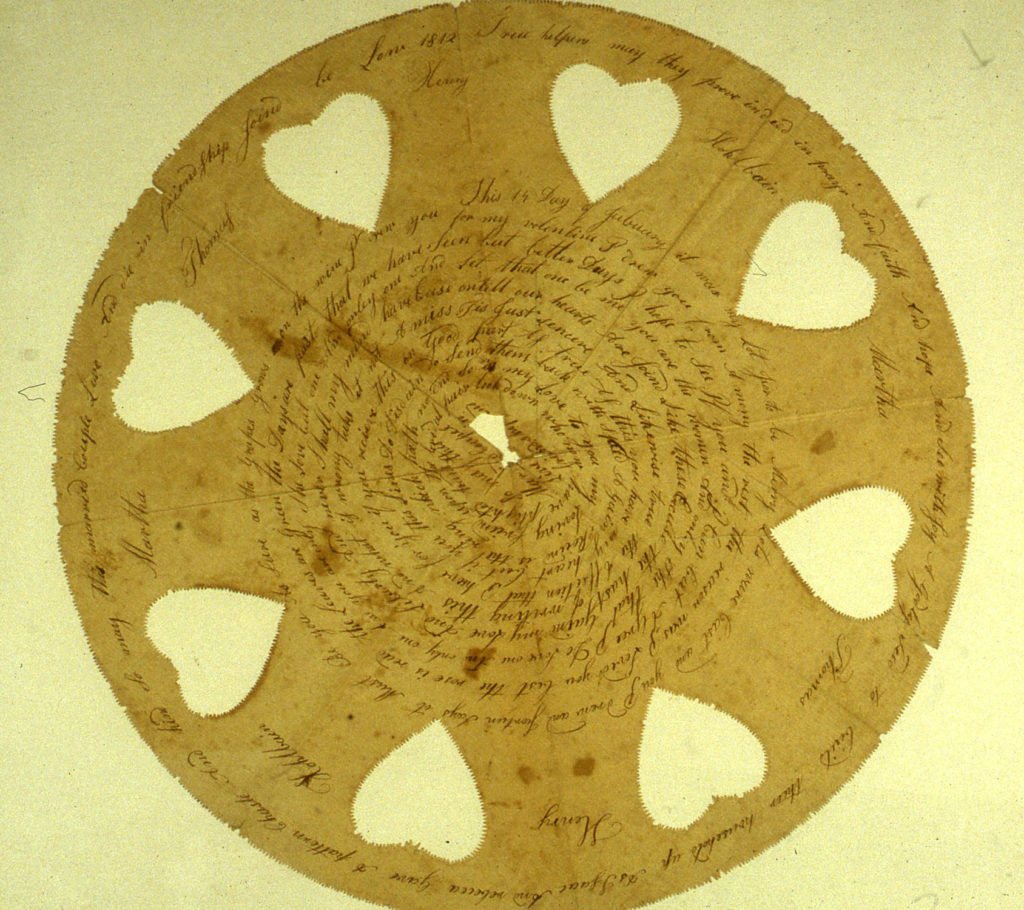 Henry Hohlbain of New Britain Township, Bucks County created this valentine in 1812. It is dedicated to his valentine and childhood sweetheart Martha Thomas. They married May 28, 1812, and were married for 56 years! To achieve a cutout great skill with very sharp scissors was needed. The spiral text on this valentine reads, “This 14 day of February it was my lot for to be Merry. Lots were cast and you I drew, and Fortune says it must be true, As sure as the grapes grow on the vine, I drew you for my Valentine. I drew you from among the rest, the reasons was I loved you best, the rose is red, the leaves are green, the days are past that we have seen, but better Days I hope to see, if you and I can but Agree”. Drawing lots is an old Valentine custom. It was customary to draw lots, which were names written on small slips of paper, and the name you pulled was your valentine for the day! 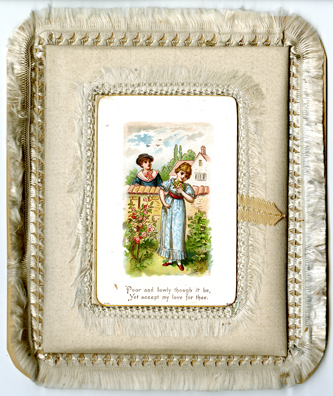 Mass-produced valentines replaced handmade valentines in the 1840s. Silk fringe valentines were introduced in the 1880s. This particular valentine was printed by Raphael Tuck & Sons, which was started in London, England in 1866. It originally started as a framing business and with the help of his wife and three sons (Herman, Adolph and Gustave), expanded into Raphael Tuck & Sons Ltd. They began publishing valentines in the 1880s including “stand ups” or mechanical valentines. During the Blitz, the company headquarters was destroyed including the originals for most of their cards. 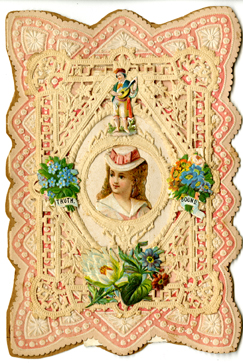 During the Victorian era, Valentines were more or less of the same general style. They consisted of a double sheet, the face or top being heavily embossed with color, layers of fancy paper, and four corners ornamented with a verse printed on the inside page. This valentine is decorated with white lace paper and colorful embossed images. The valentine was sent in 1885 “from Grandmother”. 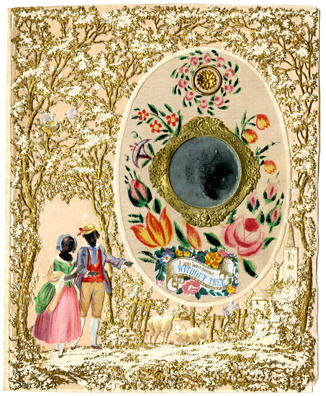 Esther Allen Howland, The Mother of the American Valentine

Esther Allen Howland was born in Worcester, Massachusetts in 1828. Her father Southworth Howland operated the largest book and stationery store in Worcester. When Esther was 19 she received an ornate valentine from a business associate of her father's. At this time elaborate Valentine greeting cards were imported from Europe and not affordable to many Americans. She thought she could make a better valentine and asked her father to order her supplies from New York City and England. She made samples, which her salesman brother added to his inventory for his next sales trip for their father's business. Hoping for $200 worth of orders, she was elated when he returned with over $5,000 worth of business for her. She opened her own valentine business and implemented an assembly line. She created the sample valentine, which her female employees copied. Esther would still inspect every valentine made. She began to import materials from Germany. In order to distinguish her valentines Esther began stamping the letter "H" on the back of her cards in red ink along with the price and the letters ‘N.E.V.Co.’ which stood for the name of her company New England Valentine Company. Esther sold the business to George Whitney in 1880 in order to take care of her sick father. She died in 1904. This valentine is decorated with a small mirror and a paper wafer. 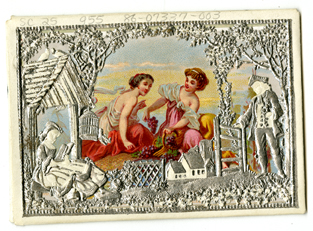 George Clarkson Whitney was born in 1842 in Massachusetts. Upon returning from serving in the Civil War, Whitney entered into business with his brother Sumner, who owned a wholesale stationery store. Sumner and his wife were also handcrafting valentines as a side job. Eventually, the George C. Whitney valentine manufacturing company was in business from 1866 to 1942. It began as a wholesale stationery store on Main Street in Worcester, MA but by 1888 it was one of the largest valentine publishers in this country with offices in New York, Boston, and Chicago. To eliminate the need to import the basic materials from England, he installed the machinery necessary to emboss paper and to make paper lace domestically. 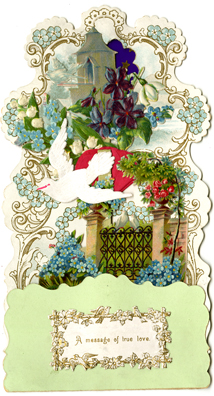 This is an example of a “pull out” which can actually pull out and stand up on a cardboard rest so that they may be displayed on a table or mantel. They represent a distinct time period in Valentine art. Germany was the main producer of mechanical valentines. This valentine from our collection can fold out to stand on its own and is decorated with red honeycomb paper and a small purple gel window.

This mechanical party cracker valentine was also made in Germany. Ernest Nister, who was born in 1841 in Darmstadt, Germany, published this valentine. He became a publisher and printer of movable books for children, greeting cards, postcards, and calendars. Nister had an office in London and a firm based in Nuremberg.

This valentine is comprised of three mass-produced embossed valentines attached together by a blue ribbon. It has images of butterflies, young lovers, and a cupid. It was mailed in 1908 and would have been hung on display. 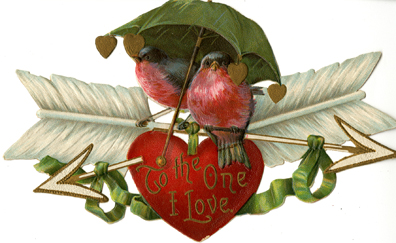 Postcards and postcard collecting was incredibly popular from 1907 to 1914. A pioneer was Raphael Tuck and Sons, Ltd. They turned to postcard design and production at the turn of the century. Postcards were also a necessity because of limited access to paper and hampered the export of cards from Germany caused by World War I. Americans who wanted to send valentines turned to simpler American made postcard valentines. This one has a handwritten poem on the back. 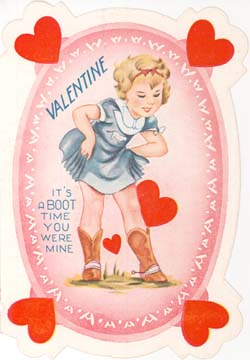 This valentine was made in the United States. It is decorated with more classic valentine imagery such as the big red hearts. These types of cards are typically what people think of when they think of valentines cards. 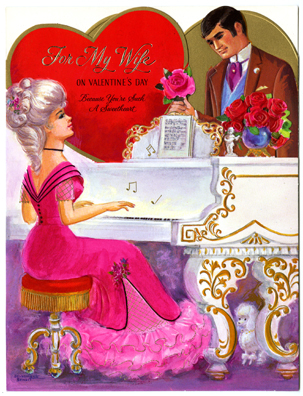 This valentine was published by Gibson cards, an American greeting card company. The card folds out to reveal the man holding a bouquet of flowers. The card is signed by Paul and was intended for his wife.